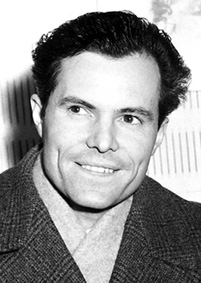 What is Mössbauer spectroscopy?

Mössbauer spectroscopy, named after the german physicist Rudolf Mössbauer, is used to study the local atomic environment around nuclei in a solid and thus provides information at the atomic level. In mineralogy Mössbauer spectroscopy is used to determine redox ratios, spin and valence state, and the site occupation (coordination polyhedra) of atoms in the crystal structure.

A calendar of the history of Mössbauer spectroscopy was put together by Prof. em. Leopold May of the Catholic University of America.

· in-situ studies at high P and/or T are possible

The Mössbauer effect describes the recoilless emission and resonant absorption of gamma radiation by atomic nuclei in solids [16].

In a solid, however, the recoil energy may be annihilated (ER⇨0) and recoil-free emission and absorption become possible. There is a certain portion f of the emitting nuclei, the so-called recoil-free fraction (Debye-Waller factor, Lamb-Mössbauer factor), which is high enough in solids so γ rays can be emitted without loss of energy of the γ quantum. F becomes larger with decreasing Eγ, the recoil-free energy of the γ quantum, and decreasing χ2, the mean square vibrational amplitude of the emitting nucleus in the direction of the γ ray. Another important parameter is the line width of the gamma ray, which depends on the lifetime of the nuclear excited state. A small line width allows the detection of small changes of the γ radiation energy, i.e. the detection of nuclear hyperfine interactions. 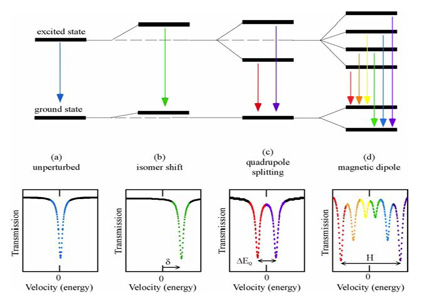 The total isomer shift (δ) or centre shift δ consists of δ0 and δSOD. It depends on coordination, valence state and spin state of atoms and thus on s electron density and p and d electrons.

This shift of nuclear levels is caused by anelectrostatic interaction between the positively charged nucleus and the negative electronic charge . It is called isomer shift because it depends on the difference in the nuclear radii of the ground (g) and isomeric excited (e) states.

A second-order Doppler shift δSOD causes the temperature dependence of the isomer shift. δSOD depends on the force constant K and the mean square displacement χ2 of the nucleus. As χ2 increases with temperature, δSOD increases and the total isomer shift δ decreases.

The quadrupole splitting is a measure of the degree of crystallographic site distortion, the valence, spin state and coordination of the absorber atoms.

An electric quadrupole interaction, the splitting of nuclear energy levels, is caused by the interaction between the nuclear quadrupole moment Q (nuclear spin quantum number I > 1/2) and the non-cubic component of its surrounding electric field. In the case of 57Fe the excited state of the 57Fe nucleus is split, thus two nuclear transitions from the ground state to the excited states rather than just one occur. This results in two corresponding peaks in the Mössbauer spectrum. The energy difference between the two peaks describes the energy difference between the two excited states, i.e. the quadrupole splitting. The magnitude of the QS depends on the electric field gradient (EFG) q. The EFG is non-zero if the charge distribution around the nucleus (valence electrons and lattice ions) deviates from cubic symmetry.

A nucleus with a spin quantum number I > 1 has a non-zero magnetic dipole moment. Theinteraction of this nuclear magnetic dipole moment µ and a magnetic field H (internal or external) at the nucleus causes magnetic hyperfine splitting. In the case of 57Fe the excited state (I =3/2) is split into 4 sublevels and the ground state (I=1/2) is split into 2 sublevels. This results in a peak sextet in the Mössbauer spectrum.

Hide
Schematic view of a Mössbauer spectrometer. --- Image courtesy McCammon, C. (2004) Mössbauer spectroscopy: Applications. In: Beran, A. & Libowitzky, E. (eds.) Spectroscopic Methods in Mineralogy. EMU Notes in Mineralogy, 6, 369-398. All rights reserved.
A Mössbauer setup consists of the source, the absorber (sample) and the detector. To vary the energy the Doppler effect is used by moving the source relative to the absorber.

Hide
The Doppler effect (or Doppler shift) is named after and was proposed by the austrian physicist Christian Doppler in 1842 in Prague, Czech Republic. It describes the frequency change of a wave for an observer moving relative to the source of the wave.

During the approach of a wave at the observer the received frequency is higher than the emitted frequency, it is identical when the wave passes by, and it is lower during the decay of the wave.

When the source of the waves is moving toward the observer, each successive wave is emitted from a position closer to the observer than the previous wave; each wave takes less time to reach the observer. The time between arrivals of waves at the observer is reduced, causing a frequency increase.

A linear geometry, with the detector arranged behind the source and absorber, is used for transmission studies to study all nuclei in the sample. A backscatter geometry in contrast can be used to study surface nuclei of the sample. The latter technique is called Conversion Electron Mössbauer Spectroscopy (CEMS) [15].

The source is a radioactive parent of a Mössbauer isotope, e.g. 57Co is the parent of 57Fe. An ideal Mössbauer source has a relatively low energy of the gamma radiation Eγ, thus a high recoil free fraction f, a long mean lifetime t of the first excited nuclear level, and thus a small half width G. 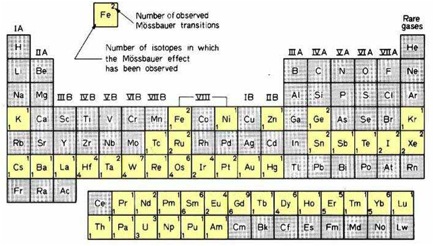 A popular Mössbauer isotope is iron, because the half-life of its parent 57Co is reasonable long (270 days), the natural line width is relatively small (0.097 mm/s), recoil-free fractions are generally high at room temperature and the absorption cross section is sufficiently high that reasonable spectra can be obtained even for absorbers with low iron concentrations. The source diameter for conventional 57Co sources is in the order of 1 cm. It depends on the density of the parent nuclei and their number required for a sufficient count rate. Other suitable Mössbauer isotopes, such as 119Sn and 121Sb are highlighted in the periodic table.

The absorber, the sample, can be a powder, glass, single crystal, a melt or a liquid. The sample can be cooled, heated, measured under high-pressure or in an external magnetic field.

The detector can be a gas-proportional counter, a multi-channel analyzer combined with scintillation or semiconductor detectors, or a resonance counter.

· Mössbauer effect data center ( This site may be offline. )