Hide
Tribe members in traditional garb riding on horseback through the forest. Introduction of the horse became a defining characteristic for Nez Perce culture. One particular breed that the Nez Perce favored and successfully perfected was the colorful and spotted Appaloosa. Adapting to the use of the horse, the Nez Perce successfully expanded trade and communications. Through their expertise in breeding and care for horses the Nez Perce gained a very respectable reputation that spread among many other tribes. For the Nez Perce the horse was not just a tool, but a warrior. Details

Use the following links to learn more about the Nez Perce culture, history, and traditions.

Show me where to find out more about the Nez Perce Tribe.

The Nez Perce Reservation, located in north central Idaho, consists of 88,314 acres with a tribal population of 3,250. Tribal headquarters are located in the city of Lapwai, which has a population 1,093. Lapwai is the basis of operations for the Northern Idaho Indian Agency, as well as the location of Fort Lapwai. Two miles north of Lapwai is the Nez Perce National Historic Park, where tribal members annually demonstrate cultural practices during the summer season. The Reservation includes two Idaho Counties: Nez Perce county, population 33,400, per capita income $13,022 and Lewis County, population 3,700, per capita income $14,524. The principal industries for the Nez Perce include forest products, fishing, agriculture, and construction of sand and gravel deposits. 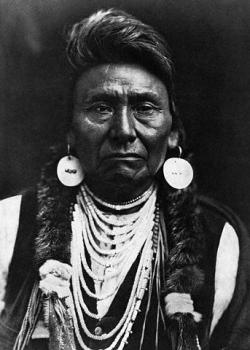 Hide
Portrait of Tribal Leader Chief Joseph. Chief Joseph (ca. 1840-1904), was the civil leader of the Nez Perce nation from 1871 until his death. He led the Nez Perce in resisting the illegal treaty that ceded their land to the U.S. government, and when peaceful measures failed, he tried to get his people to the safety of Canada. Though the Nez Perce defeated the army in several battles, they were stopped near the Canadian border. Chief Joseph lived out the rest of his life on the Colville reservation in Washington State, declaring "I will fight no more forever", which remains a philosophy of the Nez Perce today. Details

The Nez Perce, or Nimiipu, belong to the Sahaptin linguistic group of Northwest Plateau Region. Traditionally the Nez Perce existed as a semi-nomadic people whose settlement organizations changed consistently with different seasons. At one point in time they occupied an area that covered parts of North Central Idaho, Northeastern Oregon, and Southeastern Washington. Although the U.S. Treaty of 1855 reserved much of the Nez Perce's ancestral lands, the discovery of gold in the 1860's led to the Treaty of 1863 (referred to as the "non-treaty"), which re-adjusted Reservation boundaries. The Reservation was reduced by seven million acres, leaving the Nez Perce with 757,000 acres. Some of the Nez Perce however, refused to sign this treaty in which the U.S. government immediately responded to in 1877 causing a conflict. Following a 1,700 mile, four-month fighting retreat, the group led by Chief Joseph surrendered and were sent to a reservation in Washington. During this time the U.S. issued the Dawes General Allotment Act of 1877, which distributed the rest of reserved lands among the tribe. By 1893, the Nez Perce were then pressured into signing an agreement, which declared all unallotted land as "surplus" and sold to the Government for homesteading. Issuance of the Dawes Act reduced the Nez Perce Reservation from 757,000 acres to about 86,500 acres; an 88 percent reduction. In 1948, the Nez Perce Tribe became a self-governing body under an approved constitution and by-laws, led by an executive committee. Today the Nez Perce Tribal Executive Committee is composed of nine members distributed geographically throughout the reservation.