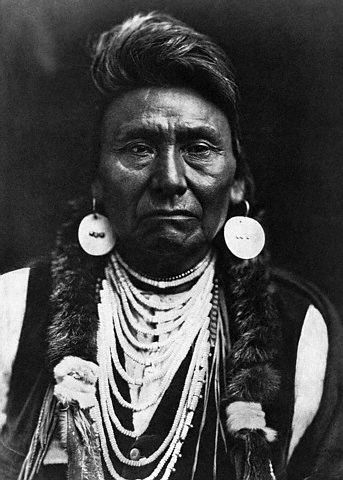 Portrait of Tribal Leader Chief Joseph. Chief Joseph (ca. 1840-1904), was the civil leader of the Nez Perce nation from 1871 until his death. He led the Nez Perce in resisting the illegal treaty that ceded their land to the U.S. government, and when peaceful measures failed, he tried to get his people to the safety of Canada. Though the Nez Perce defeated the army in several battles, they were stopped near the Canadian border. Chief Joseph lived out the rest of his life on the Colville reservation in Washington State, declaring "I will fight no more forever", which remains a philosophy of the Nez Perce today.
Originally uploaded in Integrating Research and Education:Impacts on American Indian Lands:Nez Perce.

Last Modified: 2007-06-08 10:41:04
Permanent URL: https://serc.carleton.edu/download/images/5603/chiefjoseph.jpg
The file is referred to in 2 pages
Provenance
Image courtesy of CORBIS.
Reuse
No information about limits on reusing this item have been recorded. You will need to contact the original creator for permission in cases that exceed fair use (see http://fairuse.stanford.edu/).