Geology of the Nez Perce Reservation

Show me a general geologic map for the Clearwater Plateau 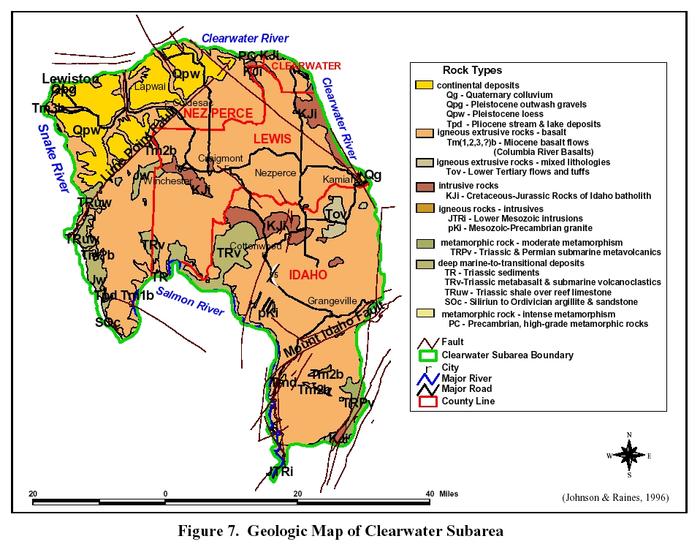 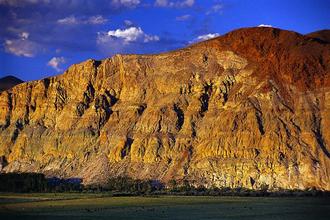 Prior to the Miocene Epoch, the Clearwater Sub-area was constructed of Permian and Triassic sedimentary and volcanic rock from the Seven Devil's Complex, as well as Cretaceous granite from the Idaho Batholith. The Sub-area's basement rock is composed of the Precambrian Belt series metasedimentary complex. Towards the southwestern boundary this Belt series has been exposed in canyons by stream activity. Exposed deposits include metamorphosed rhyolite and pyroclastics, sand, silt, clay, gravel, and boulders. Some of these deposits, such as the gravel and clay, hold economic value.

Show me the geologic time scale. 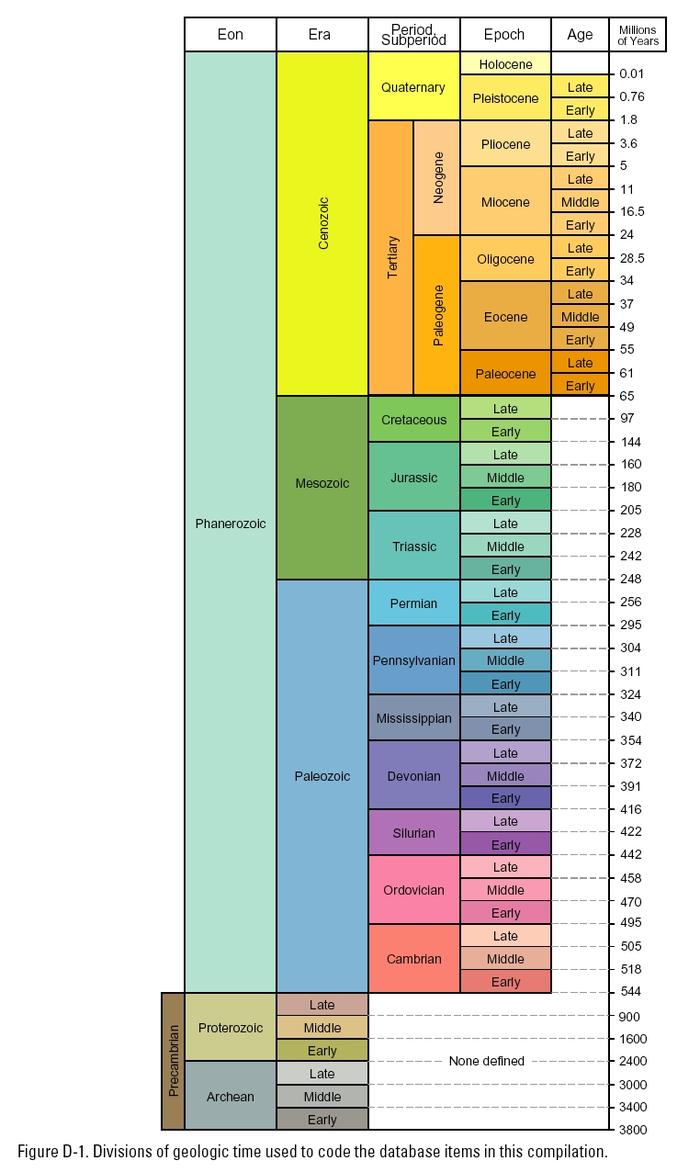 Show me a description of the geologic time scale. 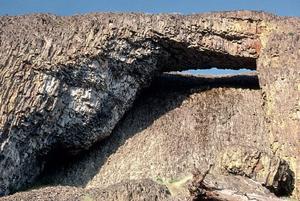 A massive basalt rock forms the Catherine Creek Arch along the Columbia River in Washington. Details

The Columbia River Basalt Group is composed of over 170,000 km3 of basalt erupted from 300 identified high volume basalt flows over a period of 11.5 million years (17.5-6.0 mya). Eighty-seven percent of these eruptions occurred over a period of 1.5 million years (17-15.5 mya). The Group is divided into five formations; the Imnaha Basalts, Grande Ronde Basalts, Picture Gorge Basalts, Wanapum Basalts, and Saddle Mountains Basalts. Each formation is separated by layered internal structures of porous, rubble-like flow-tops, variably jointed columnar basalt, and variably fractured flow bases. The Basalt's mineral composition mainly consists of plagioclase, pyroxene, and glass. Underlying the Sub-area are the Saddle Mountains, Wanapum, and Grande Ronde Basalts. Small portions of the older Picture Gorge Basalts are also found. Between layers of basalt are clay, sand, and gravel deposits, similar to the pre-Miocene deposits. These deposits are known as the Latah Beds, the result of eroded sediment deposited in bodies of water between basalt flows. As subsequent flows covered the bodies of water, the sediment was trapped, forming the current deposits of silt, clay, and gravel.

Show me the location of the Columbia River Basalt Group 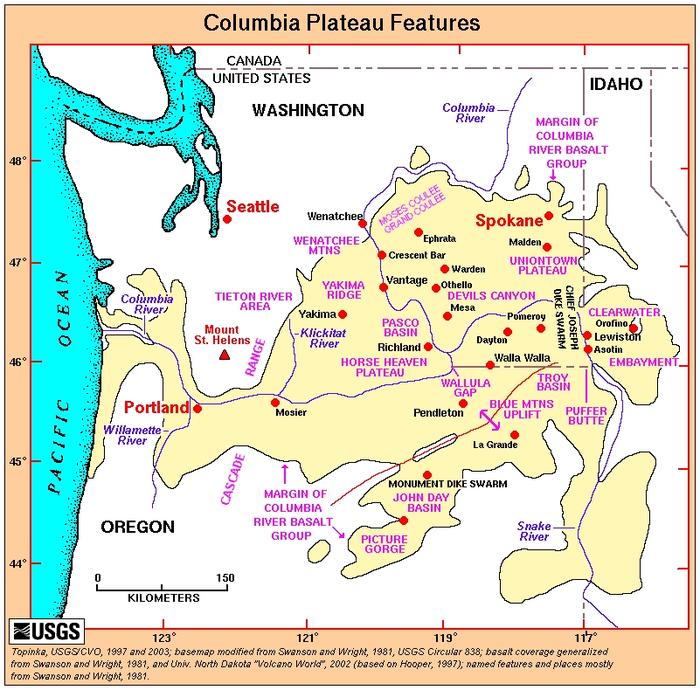 Show me the distribution of the Columbia River Basalt Group 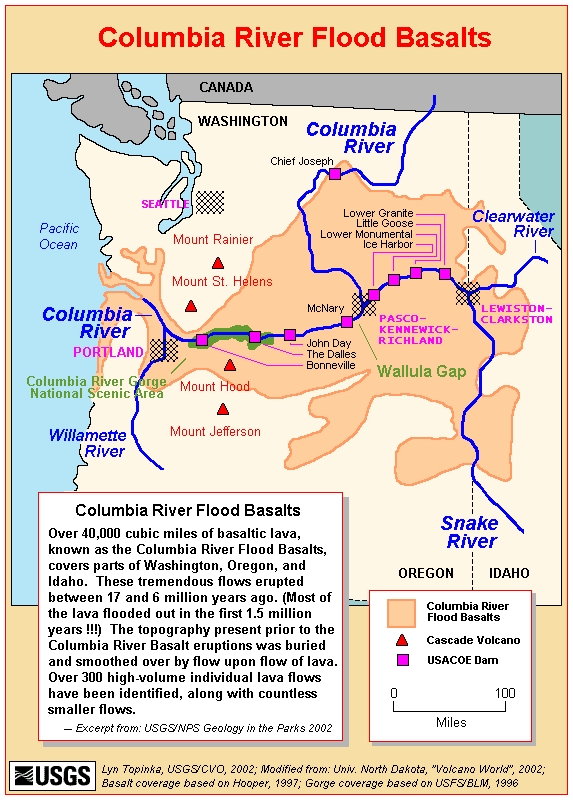 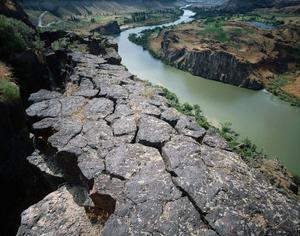 Following the deposition of Columbia River Basalts, the Clearwater Plateau experienced a period of structural deformation from the late Pliocene to early Pleistocene time period. Deformation from tilting and faulting created such features as the east trending Lewiston syncline and the northeast trending Craig Mountain anticline, which is dissected by the Limekiln Fault (also known as the Lime Point Fault and the Waha Escarpment). One other prominent fault is the Mount Idaho Fault, which is a northeast trending feature that forms the southern boundary of the Clearwater Plateau.

Show me a map of the Faults in Idaho

To further investigate the geology of north central Idaho or the Columbia River Plateau follow the links below.

Geology of the Columbia River Plateau and North Central Idaho

Show additional information about the geology of the Nez Perce Reservation.


For ideas on how to use these webpages in a classroom, a Study Guide is provided.