Physiography of the Nez Perce Reservation

Show me the location of the Clearwater Plateau 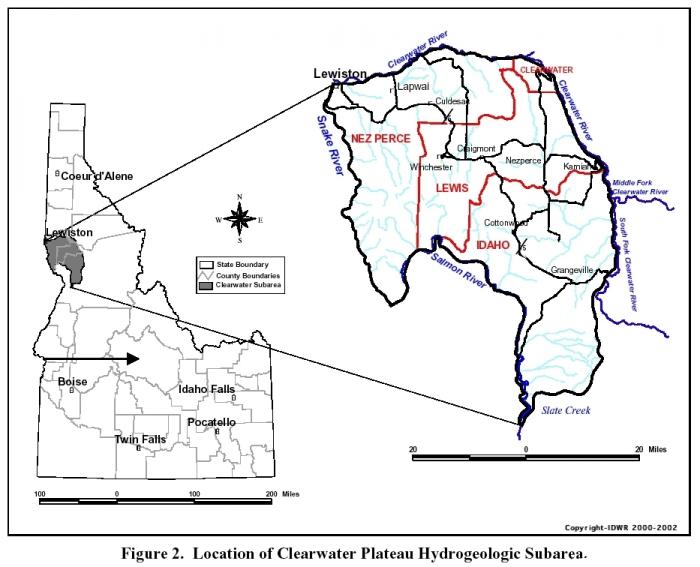 The Clearwater Sub-basin is characterized by rolling plateaus dissected by deeply cut canyons. Forested mountainous terrain, primarily south of Grangeville in the Craig Mountain area, comprises about 30 percent of the Clearwater Plateau. Elevations within the Plateau extend from about 700 feet above sea level near the confluence of the Snake River and the Clearwater River at Lewiston, to an elevation of more than 5000 feet on the Craig Mountain and Mount Idaho area (Haggen IDWR 2000-2002 ( This site may be offline. ) ).

Terrain ranges from rugged, steep peaks, ridges, and cirques at higher elevations, through tree-covered mountains and meadows at intermediate elevations, to steep, narrow, heavily vegetated canyons at lower elevations. Dominating the physiography of the area are the Salmon River, Clearwater River, South Fork Clearwater River, and Snake River (Haggen IDWR 2000-2002 ( This site may be offline. ) ). 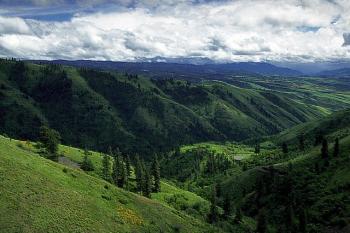 Foothills of the Clearwater Mountains. Details

The triangular-shaped Lewiston Basin is bounded on the west by the Snake River; the north by the Clearwater River; and the southeast by the Waha Escarpment. The Soldiers Meadow Slope is located between the Lewiston Basin and the Salmon River. It extends from the Craig Mountain area toward the northeast, and merges into the Nez Perce Plateau, near the City of Winchester. The Nez Perce Plateau and Camas Prairie occupy the basalt plateau, which stretches from the Waha Escarpment to the Mount Idaho Escarpment south of Grangeville. The Nez Perce Plateau and the Camas Prairie are combined into a single unit, referred to as the Clearwater Plateau. The elevation of the Clearwater Plateau is relatively constant, with elevations ranging from 3000 feet to 3500 feet. The Whitebird Basin and Dairy Mountain Slope are located in the terrain to the south of Grangeville (Haggen IDWR 2000-2002 ( This site may be offline. ) ).

The predominant soil in the Clearwater Sub-area is loess (fine-grained glacial material deposited by wind). Because the Clearwater Plateau is higher in elevation than other portions of the Columbia River Plateau, the loess is generally quite thin, often measuring only a few feet in thickness. Geologists believe variation in thickness is a result of the glacial Lake Missoula Flood. The USDA separates the soils within the Sub-area into three groups: 1) soils on dissected alluvial terraces; 2) soils on plateaus; and 3) soils on canyon sides and mountains (Haggen IDWR 2000-2002 ( This site may be offline. ) ). 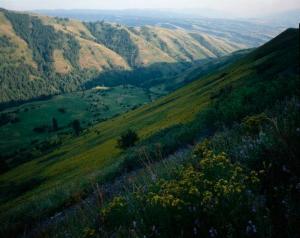 Show me a map of soil deposits for the Clearwater Plateau 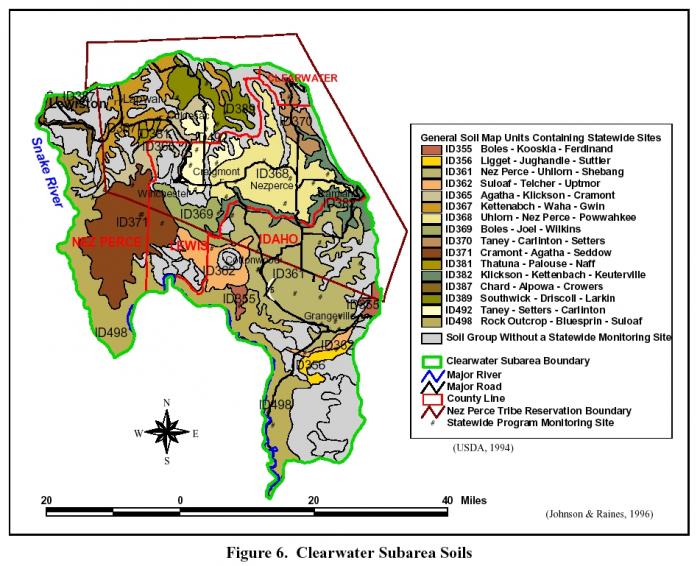 Major land cover categories in the Clearwater Sub-area include agriculture and pasture, forestland, and rangeland, with agriculture and pasture constituting forty-nine percent of the total land use in the Sub-area. The native vegetation is bunchgrass prairie at the lower elevations and coniferous forest in the cool and moist higher elevations. Central portions of the Plateau have been developed into agricultural lands while the higher elevations of the sub-area remain forested. Shrub steppe and grassland cover the canyon walls along the Salmon River and Snake River (Haggen IDWR 2000-2002 ( This site may be offline. ) ). 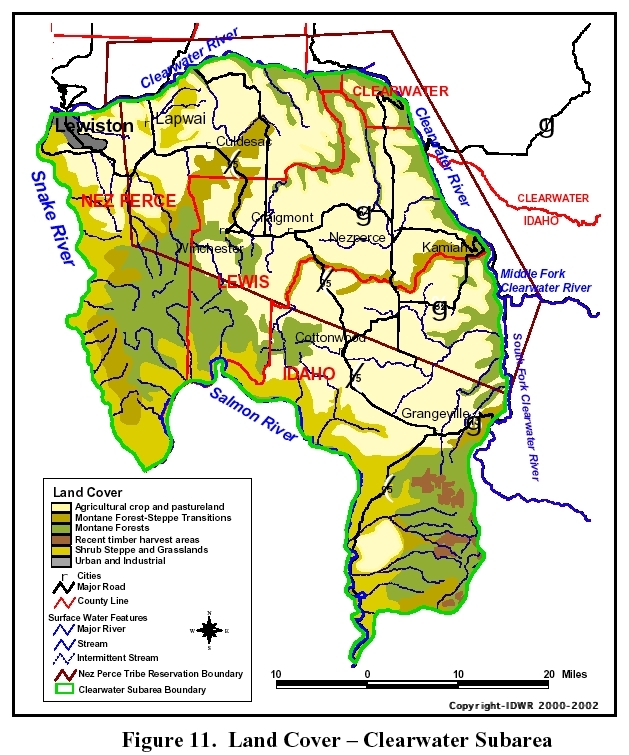 To further investigate the physiography of the Nez Perce reservation, follow the links below.

Physiography of the Nez Perce Reservation

Resources containing information about the physiography of the Nez Perce Reservation.

Show me physiographic resources for the Nez Perce Reservation