Climate and Biota of the Nez Perce Reservation 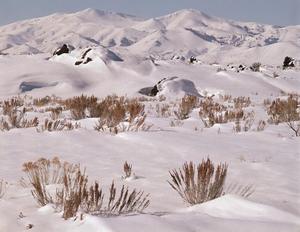 Snow in Craters of the Moon National Monument, Idaho. Details

The climate in the Clearwater Plateau is arid to semi-arid with hot dry summers and moderately cold winters. Winters are dominated by cool air masses from the Gulf of Alaska and summers by a stationary high-pressure zone over the Pacific Northwest coast. Temperature and precipitation vary significantly across the plateau due to differences in elevation and topography. Average annual precipitation, based on precipitation records from the years 1971 through 2000, ranges from just less than 13 inches in the Lewiston area to more than 50 inches along the Mount Idaho Escarpment south of the City of Grangeville. On the Plateau, the average annual precipitation is approximately 24 inches, with almost one-half the precipitation occurring during March through June. The 30-year average (1971-2000) annual temperature for the Lewiston area is 52.7°F. By comparison, the 30-year average annual temperature for Grangeville is 46.7° F (Haggen, IDWR 2000-2002).

Show me an annual precipitation map for the Clearwater Plateau. 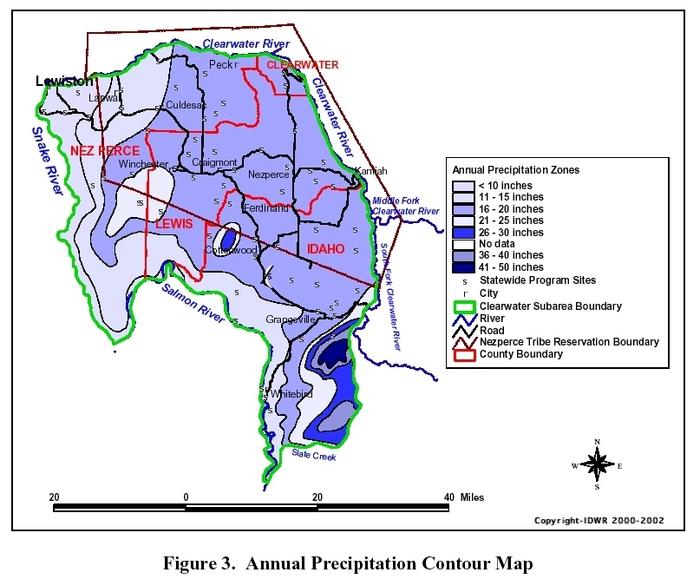 To further investigate the climate of the Nez Perce reservation, follow the links below.

Resources about the Climate of North Central Idaho

Show me climate resources for the Nez Perce Reservation 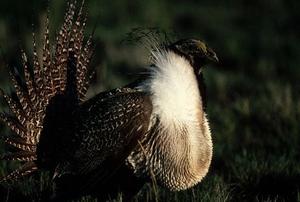 The physiographic diversity existent in the Nez Perce region provides for a wide variety of biota ranging from aquatic to terrestrial. River gorges, being the main source of water, account for much of the biodiversity in the area, while another major area providing suitable habitat is the mountainous terrain. Common terrestrial plants naturally found in the area include Achnatherum hymenoides (Indian ricegrass), Camassia quamash (camas plant), and Artemisia tridentata (big sagebrush). Such plants provide habitats for terrestrial animals such as the threatened Centrocercus urophasianus (greater sage-grouse). Nearly 80% of Idaho's native terrestrial wildlife species are considered non-game and consist of about 502 species. Two species that are of major concern for both the Nez Perce and conservation groups are the gray wolf (Canis lupus) and Snake River spring/summer chinook (Oncorhynchus tshawytscha).

To further investigate the biota of the Nez Perce reservation, follow the links below.

Resources about the Biota of North Central Idaho

Show me fauna resources for the Nez Perce Reservation

Show me flora resources for the Nez Perce Reservation