The branch of biotechnology concerned with applying the techniques of genetics and molecular biology to the genetic mapping and DNA sequencing of sets of genes or the complete genomes of selected organisms, with organizing the results in databases, and with applications of the data (as in medicine or biology). From
Merriam-Webster Online Dictionary 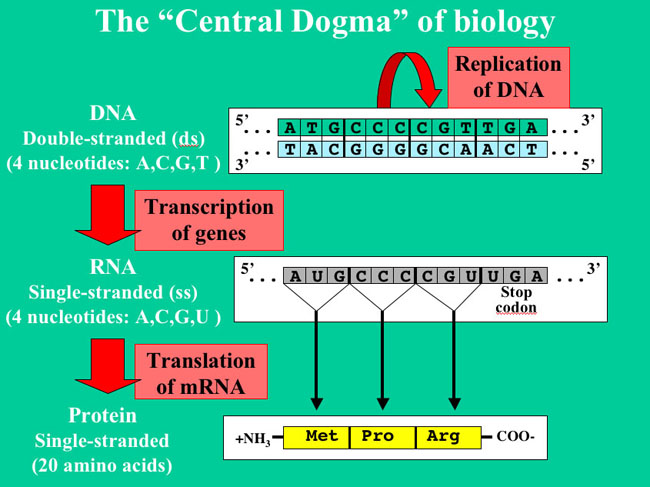 Transcription of DNA to RNA to protein: This "Central Dogma" forms the backbone of molecular biology and is represented by three major stages.

Proteins do not code for the production of protein, RNA or DNA. They are involved in almost all biological activities, structural or enzymatic.

DNA/RNA - What is it good for?

Hide
Deoxyribonucleic acid (DNA) is a nucleic acid -usually in the form of a double helix- that contains the genetic instructions specifying the biological development of all cellular forms of life and most viruses. DNA is a long polymer of nucleotides and encodes the sequence of the amino acid residues in proteins using the genetic code, a triplet code of nucleotides(fromWikipedia).


Contrary to a common misconception, DNA is not a single molecule, but rather a pair of molecules joined by hydrogen bonds; it is organized as two complementary strands, head-to-toe, with the hydrogen bonds between them. Each strand of DNA is a chain of chemical "building blocks" called nucleotides, of which there are four types: adenine (abbreviated A), cytosine (C), guanine (G) and thymine (T). Between the two strands, each base can only "pair up" with one single predetermined other base: A+T, T+A, C+G and G+C are the only possible combinations; that is, an "A" on one strand of double-stranded DNA will "mate" properly only with a "T" on the other, complementary strand. Therefore, naming the bases on the conventionally chosen side of the strand is enough to describe the entire double-strand sequence. Two nucleotides paired together are called a base pair.