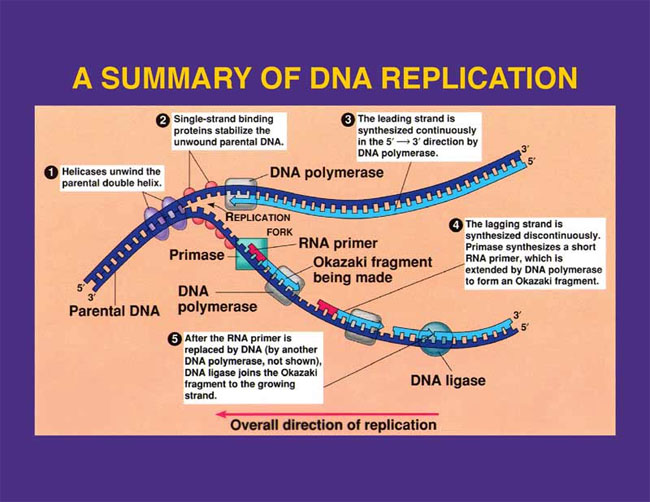 Hide
A summary of DNA replication from DNA Replication at ThinkQuest.
In general, DNA is replicated by uncoiling of the helix, strand separation by breaking of the hydrogen bonds between the complementary strands, and synthesis of two new strands by complementary base pairing. Replication begins at a specific site in the DNA called the origin of replication. DNA replication is bidirectional from the origin of replication. To begin DNA replication, unwinding enzymes called DNA helicases cause the two parent DNA strands to unwind and separate from one another at the origin of replication to form two "Y-shaped" replication forks. These replication forks are the actual site of DNA copying. Helix destabilizing proteins bind to the single-stranded regions so the two strands do not rejoin. Enzymes called topoisimerases produce breaks in the DNA and then rejoin them in order to relieve the stress in the helical molecule during replication. As the strands continue to unwind and separate in both directions around the entire DNA molecule, the hydrogen bonding of free DNA nucleotides with those on each parent strand produce new complementary strands. As the new nucleotides line up opposite each parent strand by hydrogen bonding, enzymes called DNA polymerases join the nucleotides by way of phosphodiester bonds. Actually, the nucleotides lining up by complementary base pairing are deoxynucleoside triphosphates, composed of a nitrogenous base, deoxyribose, and three phosphates. As the phosphodiester bond forms between the 5' phosphate group of the new nucleotide and the 3' OH of the last nucleotide in the DNA strand, two of the phosphates are removed providing energy for bonding. Finally each parent strand serves as a template to synthesize a complementary copy of itself, resulting in the formation of two identical DNA molecules.