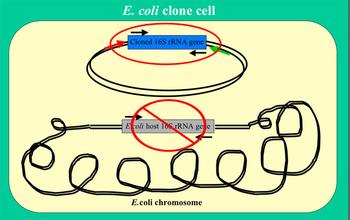 Hide
Figure depicting the cloning of a 16s RNA gene in an E. coli plasmid. (courtesy of Bruce Fouke)

"The terms recombinant DNA technology, DNA cloning, molecular cloning, or gene cloning all refer to the same process: the transfer of a DNA fragment of interest from one organism to a self-replicating genetic element such as a bacterial plasmid (cloning vector). The DNA of interest can then be propagated in a foreign host cell. This technology has been around since the 1970s, and it has become a common practice in molecular biology labs today." (from the Cloning Fact Sheet more info.)
Cloning is frequently employed to amplify DNA fragments containing genes, an essential step in their subsequent analysis.

How Does Molecular Cloning Work?

Cloning of any DNA sequence involves the introduction of a foreign piece of DNA into an extrachromosomal element (cloning vector) of an organism which then produces copies of the vector as it replicates itself, thereby amplifying the DNA of interest. The whole process can be summarized in the following steps: fragmentation, ligation, transfection, screening/selection, and conformation of insert.

A cloning vector is simply a DNA molecule that can be inserted into a host cell and replicates inside the host (bacteria or yeast), producing many copies of itself and the insert DNA. All cloning vectors contain -

How to Clone DNA Fragments -

Hide
Diagram of the cloning vector puc 19 (from dwb.unl.edu/.../genome/ moltec/vectors/puc19.htm).