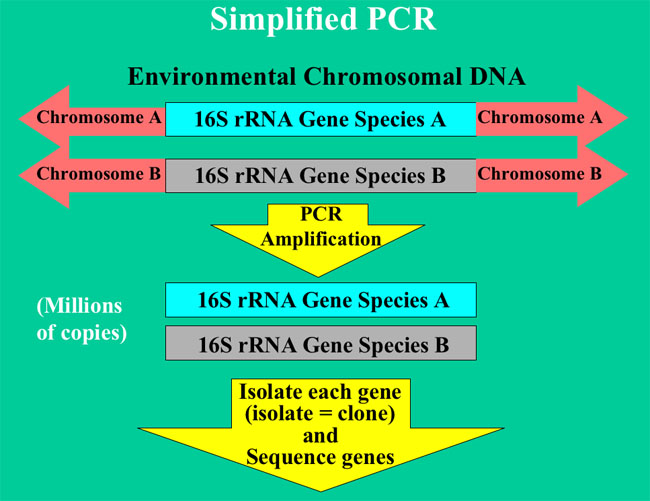 Hide
Images of students from the Fouke lab sampling at Mammoth Hot Springs, Yellowstone National Park (courtesy of Bruce Fouke's lab).
Collect an environmental sample (learn more) - Collecting samples involves the isolation and careful gathering of specimens of interest in a given environmental study. Methodologies employed can be as involved and diverse as the studies themselves.

Hide
A gel box is used to separate DNA in an agarose gel with an electrical charge.
Extract chromosomal DNA (learn more) - Extraction of the genetic material from the organisms of interest is the first step in identifying them at the molecular level.

Hide
Image of a thermocycler used in PCR.
PCR amplify 16S rRNA genes from the collective DNA (learn more) - "Sometimes called molecular photocopying, the polymerase chain reaction (PCR) is a fast and inexpensive technique used to "amplify" - copy - small segments of DNA. Because significant amounts of a sample of DNA are necessary for molecular and genetic analyses, studies of isolated pieces of DNA are nearly impossible without PCR amplification" (from the National Human Genome Research Institute ).

Hide
Mega BLAST uses a greedy algorithm [1] for the nucleotide sequence alignment search. This program is optimized for aligning sequences that differ slightly as a result of sequencing or other similar "errors". When larger word size is used (see explanation below), it is up to 10 times faster than more common sequence similarity programs. Mega BLAST is also able to efficiently handle much longer DNA sequences than the BLASTN program of traditional BLAST algorithm.
Process and analyze the sequences -