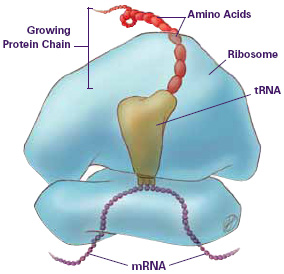 Hide
From Inside the Cellproduced by the National Institute of General Medical Sciences at the National Institutes of Health (NIH).
Translation is the process that takes the information passed from DNA as messenger RNA and turns it into a series of amino acids bound together with peptide bonds. It is essentially a translation from one code (nucleotide sequence) to another code (amino acid sequence). The ribosome is the site of this action, just as RNA polymerase was the site of mRNA synthesis. The ribosome matches the base sequence on the mRNA in sets of three bases (called codons) to tRNA molecules that have the three complementary bases in their anticodon regions. Again, the base-pairing rule is important in this recognition (A binds to U and C binds to G). The ribosome moves along the mRNA, matching 3 base pairs at a time and adding the amino acids to the polypeptide chain. When the ribosome reaches one of the "stop" codes, the ribosome releases both the polypeptide and the mRNA. This polypeptide will twist into its native conformation and begin to act as a protein in the cells metabolism.
The steps in translation are:

The following resource was originally accessed through the BioSciEd Net (BEN) digital resources collection, which is the National Science Digital Library (NSDL) (more info) Pathway for biological sciences education. For more teaching resources, please visit BEN to use their searchable database. BEN is free to use, but requires registration.