Understanding the Science of Climate Change

At this point, you should have either watched one or two of the videos from the introduction, or you're already familiar with how human activities have resulted in the warming of the planet in the last century. Now, we'll explore some of the latest data from the National Aeronautics and Space Administration (NASA), the National Oceanic and Atmospheric Administration (NOAA), and the Intergovernmental Panel on Climate Change (IPCC) to review and to help us better understand the connections between increases in atmospheric carbon dioxide and climate change.

Data on current atmospheric concentrations of carbon dioxide are collected and compiled by NOAA and can be found at NOAA Earth System Research Laboratory. The longest record of carbon dioxide concentration in the atmosphere is from Mauna Loa in Hawaii and was initiated in the 1950s. The resulting curve is often referred to as the "Keeling Curve" (Figure 9.1.1) after the atmospheric scientist who first began collecting CO2 data. 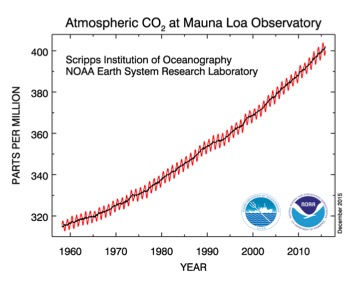 ×
Figure 9.1.1. Monthly mean atmospheric carbon dioxide at Mauna Loa Observatory, Hawaii. The carbon dioxide data (red curve), measured as the mole fraction in dry air, on Mauna Loa constitute the longest record of direct measurements of CO2 in the atmosphere. They were started by C. David Keeling of the Scripps Institution of Oceanography in March of 1958 at a facility of the National Oceanic and Atmospheric Administration [Keeling, 1976]. NOAA started its own CO2 measurements in May of 1974, and they have run in parallel with those made by Scripps since then [Thoning, 1989]. The black curve represents the seasonally corrected data. Data are reported as a dry mole fraction defined as the number of molecules of carbon dioxide divided by the number of molecules of dry air multiplied by one million (ppm).
Credit: Earth System Research Laboratory 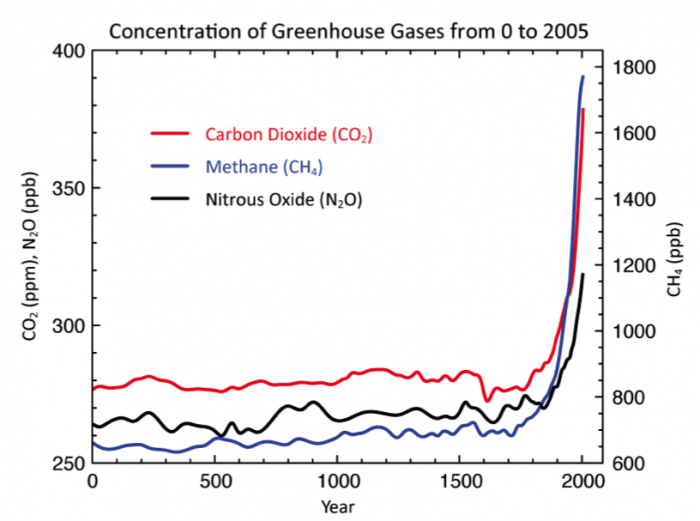 ×
Figure 9.1.2. Atmospheric concentrations of important long-lived greenhouse gases over the last 2,000 years. Increases since about 1750 are attributed to human activities in the industrial era. Concentration units are parts per million (ppm) or parts per billion (ppb), indicating the number of molecules of the greenhouse gas per million or billion air molecules, respectively, in an atmospheric sample.
Credit: Forster, P.; Ramawamy, V.; Artaxo, P.; Berntsen, T.; Betts, R.; Fahey, D.W.; Haywood, J.; Lean, J. et al. (2007), &quot;Changes in Atmospheric Constituents and in Radiative Forcing&quot;, Climate Change 2007: the Physical Basis. Contribution of Working Group I to the Fourth Assessment Report of the Intergovernmental Panel on Climate Change 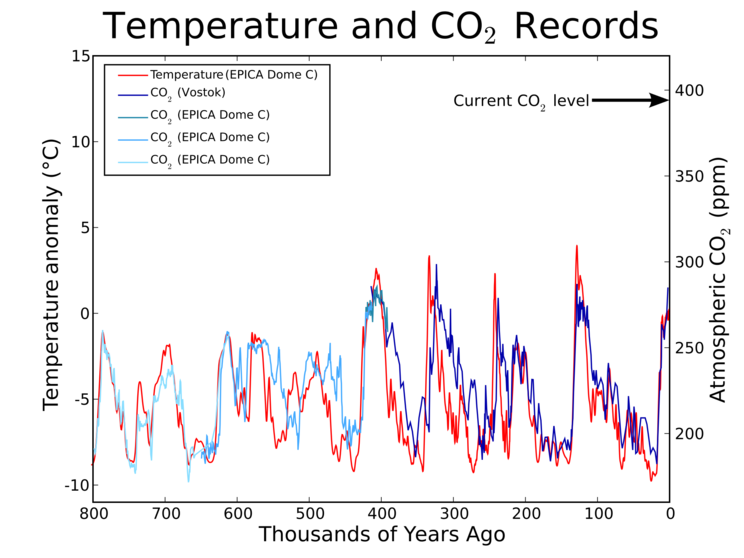 ×
Figure 9.1.3. Historical carbon dioxide (right axis and blue lines) and reconstructed temperature (as a difference from the mean temperature for the last 100 years in red) records based on Antarctic ice cores, providing data for the last 800,000 years. Atmospheric carbon dioxide levels, as measured in air, are higher today than at any time during the past 800,000 years.
Credit: Used under under the Creative Commons Attribution-Share Alike 3.0 Unported by &lt;span style=&quot;text-align:center; background-color:#f9f9f9&quot;&gt;&lt;font color=&quot;#222222&quot;&gt;&lt;font face=&quot;sans-serif&quot;&gt;&lt;span style=&quot;font-size:14px&quot;&gt;Leland McInnes at the English language Wikipedia.&lt;/span&gt;&lt;/font&gt;&lt;/font&gt;&lt;/span&gt; 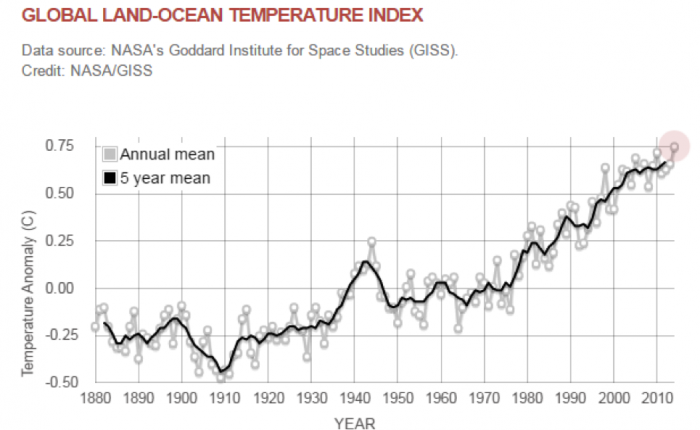 ×
Figure 9.1.4. Global Land-Ocean Temperature Index graph. This graph illustrates the change in global surface temperature relative to 1951-1980 average temperatures. The 10 warmest years in the 134-year record all have occurred since 2000, with the exception of 1998. The year 2014 ranks as the warmest on record.
Credit: NASA/GISS

Hide
ANSWER:
Current carbon dioxide concentrations (400 ppm in November 2015) are higher than at any time in at least the past 800,000 years.

Hide
ANSWER:
The annual cycle is a result of the large deciduous forests in the northern hemisphere. Trees take up more CO2 in the summer time when they have green leaves that are taking up CO2 to create new plant material via photosynthesis. In the fall, this process stops. In the winter, when deciduous trees lose their leaves, CO2 levels in the atmosphere increase as photosynthetic rates decline and as CO2 is released as plant material decays. The upward trend, since recording started in the late 1950s, is a result of the burning of fossil fuels and other anthropogenic greenhouse gas emissions.

What is the source of the increasing CO2 concentrations in the atmosphere that is evident in the Keeling Curve (Figure 9.1.1), and that has occurred since about 1850 (Figure 9.1.2)?

Hide
ANSWER:
The increase of CO2 concentrations in the atmosphere since 1850 is primarily from the burning of fossil fuels (petroleum, coal and natural gas). Other human activities also contribute, such as deforestation.

Global average temperatures have been increasing since about 1920. Explain the relationship between global temperature increase and increasing levels of CO2in the atmosphere.