by Rowan Cockett, University of Calgary

Visible Geology is an interactive visualization program where you can create and explore your own geologic block models. The goal of the program is to allow a learning environment that, with the focus of a teacher, provides students with a moment of geologic discovery. The program works in any modern browser (not Internet Explorer). 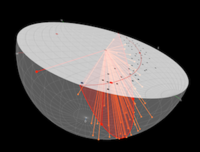 Stereonet plots lines and planes in spherical, equal angle or equal area, projections. The program can produce a wide variety of plots, and users can perform various operations, including calculating poles to planes, rotating planes and lines, constraining lines to lie on their planes, angle between lines or planes, and more. Stereonet is compatible with all modern operating systems and has a modern user interface which has been modeled after OSXStereonet for Mac by Nestor Cardozo and Rick Allmendinger. It can read and write older Stereonet text files, can read the Stereonet 11 binary files, but saves its data in a new binary format. It has an openGL 3D view of the lower hemisphere for teaching purposes.

These interactive programs help students in structural geology courses to visualize and understand the fundamental concepts of distortion, rotation, and translation under progressive general shear. These have been recently rewritten and improved upon using Java, and they will run on any machine with Java 1.4.2 or later installed. New programs have also been added to the suite, in order to cover a broader range of displacement concepts. These programs are suitable for use as teaching aids in an undergraduate or graduate level structural geology course.

The following programs are available:

Spreadsheet to Convert Rake to Plunge and Trend

This Excel spreadsheet (Excel 61kB Feb17 09) converts strike-dip-rake data (e.g., slickenlines in a fault plane) to plunge-trend of the line. Useful as most stereonet plotting programs do not accept rake data.

This template file ( 196kB Mar1 10) opens in Golden Software's Grapher program and plots a Fleuty diagram which classifies fold orientation by plotting fold hinge plunge vs. fold axial plane dip. An opening window should request an Excel data file to plot; this file should have column A titled "axial plane dip" and column B titled "axis plunge". Here is a very simple test plot data file (Excel 14kB Mar1 10). This is a simple diagram, but I find that when students collect and then plot field data on this diagram, it helps them see how to classify folds based on orientation. I have them incorporate the plot in a report describing structures studied in the field. 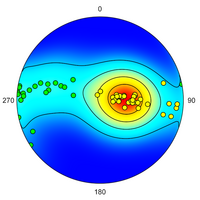 Orient is a fast, easy to use, free spherical projection and orientation data analysis program. Data entry is simple with spreadsheet integration, and output includes professional quality raster and vector graphics. Interactive data selection, rotations, and visualizations make it perfect for student use in undergraduate laboratories and field-based research projects.

Orient is for plotting and analyzing directional data, data that can be described by an axis or direction in space or, equivalently, by a position on a sphere or circle. Examples of data that are represented by unit vectors (directed) or axes (undirected) include geologic bedding planes, fault planes, fault slip directions, fold axes, paleomagnetic vectors, glacial striations, current flow directions, crystallographic axes, earthquake epicenters, cosmic ray arrival directions, comet orbital planes, positions of galaxies, whale migration paths, and the locations of objects on the Earth. Orient has been written to apply to a wide variety data types, however many examples come from structural geology, which requires extensive manipulation and analysis of orientation data.

A working group for the effective use of computers in teaching structural geology was formed at the 2004 workshop.