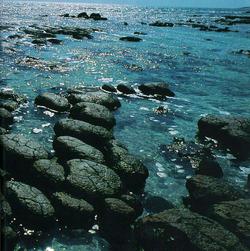 Long ago when the earth was young and life was just beginning to evolve, shallow water environments were hosts to millions of bacteria and algae. These organisms lived together in colonies that were formed by trapping sediments and secreting mucus to bind particles together. As the colony grew, so did the structure that they made - layer upon layer of sediments bound by the organisms and the secretions they produced. In order to capture as much sunlight as possible, the shape of the top of the structure tended to be curved so that there was maximum exposure to the sun. These curved structures with multi-layered interiors are known as stromatolites. 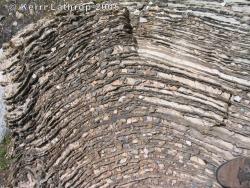 When a stromatolite becomes preserved, the dome-like top of the structure can be used to show which direction is stratigraphically younger. The internal layers will all be parallel and bowed towards the top, because the rounded surface of the stromatolite was oriented towards the sun. In the photo to the right, you can clearly see the parallel internal laminations that were formed as the organisms built their colony. 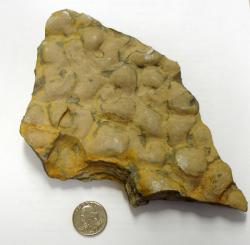 Plan view of an ancient stromatolite from Ohio. Photo courtesy of Carol Ormand.

The domal structure of stromatolites can also be seen from above, as in this sample from a Silurian-aged carbonate in Ohio. In this example, you can also see the internal laminations on the edge of the sample (near the quarter). 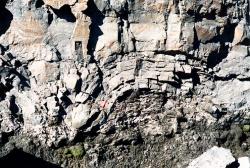 Stromatolites date back to over 3 billion years ago. Once quite prolific and abundant, now stromatolites are only found in a very few places on earth. Some scientists believe that earth would still have significant populations of stromatolites if not for the evolution of grazing animals. Originally the microorganisms that made stromatolites had no real predators. But over time, thousands of animals developed that fed on the colonies and diminished their numbers. The photo to the right shows a stromatolite that was from earlier times - it is over 2.5 billion years old!