Glaciers - those large frozen expanses that can cover valleys or whole continents - seem an unlikely contributor to stratigraphically younging indicators. They do, however, provide clues by what happens when pieces of them begin to melt. While the glaciers are active, they pluck and embed thousands of rocks into their ice body. We know that rocks existed within the glaciers by the striations that the glaciers left as they carved into the bedrock during their passage. We are also familiar with icebergs - those pieces of glacial ice that break off and float away into whichever body of water the glacier finds at its terminus, such as is seen in the picture on the left.

How do dropstones show stratigraphic up? 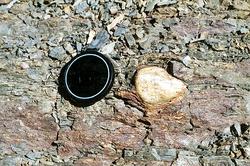 Linking these two ideas together - the embedded rocks and the migrating icebergs - we can envision how this particular type of stratigraphically younging indicator forms. Let us consider an iceberg that calves off into the ocean. As the iceberg moves out to sea, it will begin to melt. Any rocks that it had held in its ice now are released and fall to the bottom of the seafloor, which is typically covered in numerous thin layers of very fine clay sized particles. The very large rock - called a dropstone - that has come from the melting glacier is substantially different in size than the material on the seafloor. 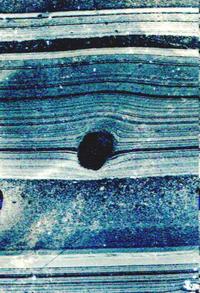 Because of the dropstone's more substantial mass, it will embed itself into the sediments to many centimeters depth. This causes the layers into which it falls to be deformed by compaction and/or piercing. Subsequent sediments will fill in around the dropstone and eventually cap it, but these sedimentary layers will appear to be draped across the top of the dropstone instead of crushed and compacted. By seeing how a dropstone compares to the sediments surrounding it, we can tell which way was originally up. For example, the dropstones shown in the three photos to the left and below all are oriented stratigraphically up. 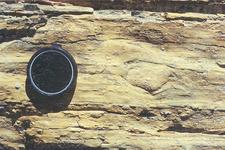 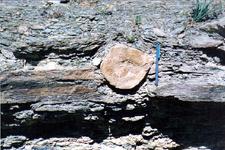