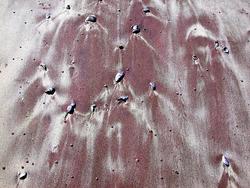 Sole marks are features that are preserved when a coarse sand or silt layer deposits onto mud. Typically during deposition of the sand/silt the flow of the water erodes pits and scars into the mud layer and then these depressions are later in-filled with the more coarse material. The photo to the left shows this occurring in a modern environment. The shells are embedded into the muddy underlayer and water has flowed past, causing the downstream side of the shells to have the mud carved out from it. The eroded portion tapers downstream, so these marks can not only be used to determine stratigraphic up but also paleoflow direction. These depressions will later be filled with sand and preserved into a specific kind of sole mark called a flute mark.

The two photos below both show flute marks preserved in ancient sediments. They formed in the same manner as the modern day example above, just many millions of years ago. Looking at the modern example, you can observe that the depressions made by the flowing water carve into the bed, so they will bow towards the stratigraphically older part and open upwards towards the stratigraphically younger portion. Now, examine the two images below. Both have marks that show a more rounded end that bows out towards the camera. This shows that stratigraphic up is away from the view in the camera and the older part of the bed is closest. It also shows paleoflow direction - the flow was from the thicker part that is more distinctly bowed towards the thinner, more pointed end. 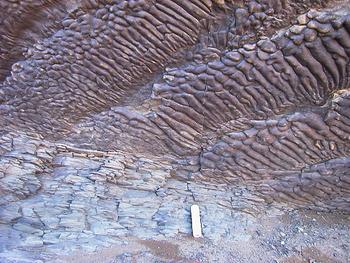 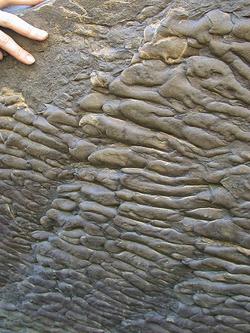