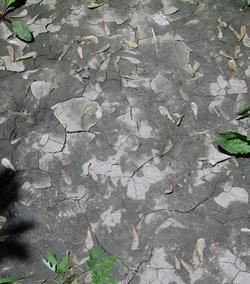 Mudcracks form in very fine clay material that has dried out. As the moisture is removed, the surface will split into cracks that extend a short way down into the mud. These cracks form polygons on the surface of the mud. The top of the bed has the widest distance between the polygons and the cracks taper downwards into the bed. If later sediments come and fill in the cracks and are preserved, the relationship of the bed to the tapered feature will be saved. The tip of the cracks are always oriented downwards, pointing to the bed base or older part of the formation. 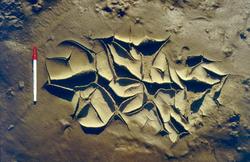 Which way is up?

There are a few ways that mudcracks can be used to figure out the original orientation of a rock that contains them. In the photograph to the right, the edges of the mudchips are curled upward. This curling of the chip edges can be preserved and will point to which way was up. 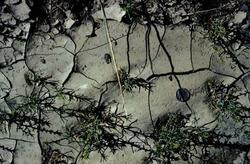 A second way of determining stratigraphic up is by looking at a plan view of cracks that have formed, like you were a bird flying over the mudcracks. They have a typical semi-regular pattern of polygons that form across the surface. An example of this from a modern environment is shown in the photo to the left. This polygon-laced surface is often preserved. When geologists see this pattern in a rock that is being studied, they can tell that they are looking down onto the top of an ancient surface.


How old can they be?

Another way of determining stratigraphic up is by looking at the cracks that have formed. They split from the surface downwards and therefore the crack will be wider at the top and taper toward the bottom (deeper into the ground). After the cracks have formed, they will often be filled in by sediment that is subsequently blown or washed into the area. These grains may fill the cracks completely and then create a layer that covers not only the in-filled cracks but the original soil surface as well. When perfectly preserved, these structures will have a wide top and a sharp end that points towards the older part of the rock, such as is shown in the picture below left. Sometimes, however, this structure becomes deformed as a result of the compaction that happens while the sediments are becoming lithified, as is shown in the photo below right. 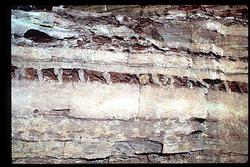 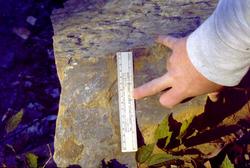