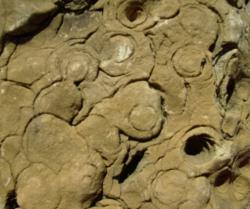 One of the most intriguing sedimentary structures that geologists have found are called cone-in-cone. They are just as their name implies - cone-shaped forms made of rock that nest inside a cone cup. Some folks mistake these for fossils, as they look somewhat similar to horn corals and other marine organisms. These cones, however, have never been alive. That being said, the debate continues as to how these actually do form! No one has been able to find them forming in a modern environment, so it cannot be studied in this manner to determine how they come to exist. They are usually made of rock that is both calcareous and contains clays, although there have been a few found that are made of siliceous material. Researchers generally agree that they form from the growth of calcareous fibers, but that is about the only consensus that is made. In general, the debate devolves to whether the growth of the calcareous fibers comes before or after the rock has some rigidity. Some think that the concretions form while the sediments are still pliable and the fibers are able to grow uninhibited, other researchers believe the fibers grow after a concretion has already been formed and the fibers fracture the concretion into the structures that are preserved. The photo to the left shows the surface of a series of cone-in-cone structures and the typical, closely packed sets of circular tops of the cones. 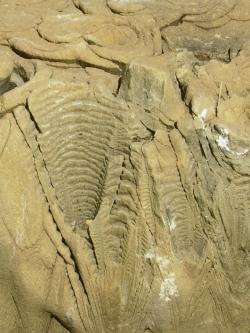 Which way is up?

Typically, these cone in cone structures form with the large, open end of the cone on the top of the bedding plane and the apex, or pointed end, of the cone pointing downward. As you can see from the photograph on the right, a side view of a cone shows that the interior of the cone cup has corrugations that are oriented perpendicular to the overall cone shape. These are called annular rings and are thought to form as a sort of growth pattern as the cones develop. 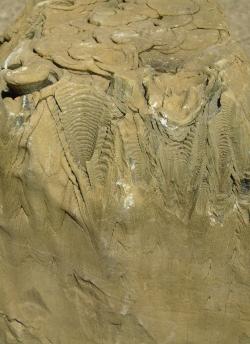 Cone in cone structure. This photo shows both the top surface (top of the image) and a side view. Photo courtesy of Dr. Diane M. Burns

Look at the left hand side of the photo on the left. Do you see the top of the cone that is partially lifted from the surface? These cones - if they are weathered enough - can actually be removed from their cone cups! That is when folks really think that they look like horn corals. If you were outside and looking at the rock and the cone was missing, you still could tell which way was stratigraphically younger by the cone cups that remain in the rock. For all of the photos on this page, the examples are in the stratigraphic up position - the top of the bed is where the opening of the cone is located and the apex of the cone points to the older part. 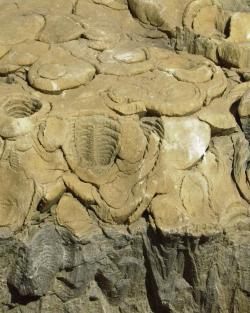 Cone in cone structure. This photo shows both the top surface (top of the image) and a side view. Photo courtesy of Dr. Diane M. Burns