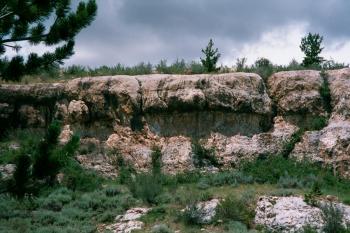 This module presents several ways of determining the upward, or younging direction within layers of rocks. Each page contains several images plus descriptions that explain how this indicator can be used. The caption for each image lets you know whether you are looking at the feature from above ("plan view") or from the side ("cross-sectional view"). Images are also available in a higher-resolution version by clicking on them, and the text for each section has also been translated into a Spanish version viewable by following the "en Espanol" link at the bottom of each page.

These structures, known as "stratigraphically younging" or "stratigraphic up" indicators, come in a variety of forms. By looking for these features, we can figure out where the top of the bed is and use this information to help tell the rocks' story. Some examples of both modern and ancient examples are shown so that the viewer can not only become familiar with what can be observed in real life but also more fully understand that the present is truly the key to the past. This module contains but a few of the many structures that can be observed in the rocks to determine stratigraphic up direction. For more information on additional structures and further discussion of stratigraphically younging indicators, visit some of the references.


Geology is a game of trying to figure out what happened first, what processes were at work to result in the current topography, what forces acted upon the rocks to make the world that we see today. It is a puzzle waiting to be unraveled, and it is sometimes difficult to understand the complete history if there has been a lot of change to the rocks after they were initially formed. More specifically, subsequent tectonism can change that orientation to where we cannot determine which way was originally the top of the bed. This is important to know in order to figure out which are the older or younger layers and as a basic starting point for understanding the whole story of the rock layers in which we are interested. With sedimentary rocks, however, there are often preserved features that can be used to determine what is the top of the bed. This module has sections on stromatolites, mudcracks, dropstones, footprints, cone in cone structures, cross bedding, sole marks, and roots. To test your knowledge of stratigraphic up indicators, try the quiz at the end of this module.

The following references are excellent resources for more information on stratigraphic indicators: