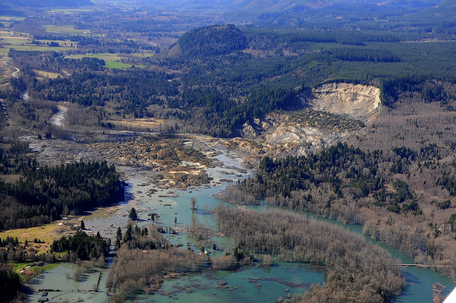 On Saturday, March 22, 2014, at 10:37 a.m. local time, a large landslide occurred near Oso, WA, USA. The collapse of the hillside generated a massive mudflow which rushed across the valley of the North Fork of the Stillaguamish River. The resulting debris field measured roughly 1 square mile. The slide and mudflow engulfed some 50 residences, buried an important highway through the area, and created a blockage that temporarily held back the river.

Browse the complete set of Hazards Events and Visualization Collections. If you have comments or additional resources to add to the page, use our Feedback box to let us know.

×
Washington mudslide: before and after
This page allows users to view before and after images of the Oso slide area using a slider. The images are constructed from lidar data and the red squares in the before image are the locations of buildings in the area of the slide.

×
Houses in the Path of the Washington Landslide
This graphic from the New York Times shows the distribution of homes around the site of the landslide debris field before and after the March 22, 2014 collapse.

×
Preliminary Interpretation of Pre-2014 Landslide Deposits in the Vicinity of Oso, Washington
Ralph A. Haugerud of the USGS published a short report after the Oso Landslide showing preliminary results of a lidar study of the area surrounding the landslide. The study was a collaboration between the Tulalip Tribes and the Puget Sound Lidar Consortium and produced a 1:24,000 scale view of the North Fork Stillaguamish River valley.

×
This 3D model was created from USGS lidar of the area near Oso, WA where the March 22, 2014 landslide occurred. This model has a vertical exaggeration of 2.

Using the same data as Haugerud, NSF Einstein Fellows David Thesenga and Jim Town have created a 3D printable version of the area surrounding the Oso landslide. Note that the current slide is not represented since the lidar study was done previously. The printed model will look like the uncolored map of the area in the Haugerud report and you can then color in the different slides with paint or nail polish.

×
A flight over the massive mudslide near Oso
Snohomish County released video from a fly over of the debris field from the landslide on Sunday, March 23, 2014. The video was taken by members of the Washington State Patrol. The County also posted a map showing which properties in the vicinity of the slide have been affected.

×
The Oso (Steelhead) landslide: mechanisms of movement and the challenges of recovering the victims
In this post for The Landslide Blog, Dr. Dave Petley of Durham University provides an interpretation of the siesmic signal generated by the landslide. Two main pulses in the seismic record point to two separate phases of the collapse with different effects.

×
Scientists Keep Eye on Mudslide Trouble Spots
This local news broadcast from Los Angeles explores what scientists at Cal Tech are doing to study and learn about landslides as a way of assessing risk and mitigating damage. 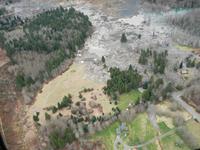 ×
What happens in a mudslide? A geologist answers.
Ashley Ahearn of the PBS News Hour interviews geologist Dave Montgomery of the University of Washington about the landslide and its potential causes.

×
Washington State's 'Slide Hill' Has A History Of Landslides
Robert Siegel speaks with Seattle Times reporter Ken Armstrong about the instability of the land in Snohomish County in Washington that was affected by the massive mudslide. The hillside was known to move, and even though no previous slide had been this large, scientists knew that the probability of a very large event was high.