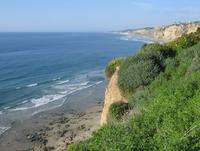 This lesson was designed to allow students to explore the detailed submarine maps on ERESE. http://earthref.org/SBN/index.html Navigation of these maps requires Adobe Flash Player 9.0, which is no longer supported by Adobe.

Students use the detailed bathymetric maps to find submarine landslides and compare the slope of these slides to the slope of hills near school and home. Students should have some experience interpreting topographic maps and basic graphing. The lesson can be used to build skills working with student collected data, discussion of slope stability (particularly with regard to seismic hazards) and increasing familiarity with the geography of ocean basins.

Students will learn how to measure and calculate (rise over run) slope of hills off topographic maps. They will then compare the slope of nearby hills to slopes of slides determined from bathymetric maps. These activities will reinforce student skills using data, graphing and topographic map reading. Related topics for discussion are seismic hazards, slope failure and tsunamis. Students will become more familiar with the geography of the ocean and their own surroundings.

Students record their activity in lab journals and are assessed using their lab journals and informally during discussion. A final writing assignment is used to determine student understanding.

This lesson was designed to help introductory oceanography students learn ocean geography while applying some of that knowledge to their lives.

This lesson requires hills or slopes near school that students can measure. It also requires the use of computers or large print outs for teams of 2 or 3 students. It was designed for 9-12th grade students in an environmental science or oceanography course. The average student should have some basic graphing skills, and be able to read a basic topographic map. Teams of students will work with computerized maps or printouts for the first half of the lesson and then work outside to collect data for the second half.
This lesson can be used to discuss seismic risk and slope stability, and wild things like mega-tsunamis.

Local topographic maps can be used if a suitable slopes are not found nearby. 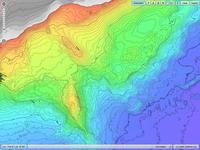 This lesson is designed as a series of activities to increase student awareness of landslides. The lesson begins with a slide show, an activity to measure slope from topographic maps, an activity to measure slope of land near the class room. During these activities students record their actions and information in a lab journal which is then evaluated. A final assessment is a short writing assignment through which students can demonstrate their new understanding.

These questions can be used to motivate the lesson in an introductory discussion.

1. Show slides of various landslides. Students draw pictures, label and write descriptions of one or two distinctive landslides. Emphasize the comparison between the slope of the original slope that failed and the slide.
Helpful links with suitable illustrations

3. Building on this experience, introduce submarine landslides and the utility of studying these slides where no erosion is taking place. Students should understand that the next activity will be to locate undersea landslides on bathymetric maps so they can determine the slope of hills that slide. The following summary can be used to engage students.

Submarine landslides have become a concern because of the massive tsunamis that can be generated. As the landslide moves underwater it can generate massive and deadly surface waves. The 2004 Indian Ocean tsunami killed a quarter of a million people along thousands of miles of coastline. Of the 36,000 people killed by the 1883 eruption of Krakatoa, 35,000 were killed by tsunamis. These tsunami waves were up to 30 meters (100 feet) high, but the highest tsunami was created by a landslide in Lituya Bay, Alaska when a cliff collapsed into a narrow deep bay and generated a wave 524 meters (1,700 feet!) high. Evidence for the height of the wave came from trees washed off the high hills of the bay.

The most common cause of extremely large "megatsunamis" is the collapse of the side of volcanic islands such as the Hawaiian Islands and the Canary Islands. A small version of these slides occurred November 29, 1975 on the Big Island of Hawaii. The steep seaward face of the Kiluea volcano suddenly slipped into the ocean generating a tsunami that killed 2 and injured 28. Evidence for much larger collapses can be seen in topographic maps of the Hawaiian Islands.

5. Once they have demonstrated they can find and describe a slide on the FlashMap, students write the MapSlopeProtocol (Microsoft Word PRIVATE FILE 39kB Mar3 08) in their journals. Class discusses the protocol so all teams understand the protocol.

6. Students then plot the angle of the slope that slid using the protocol. Once their graphs are completed teams enter their data in the class data table and make a copy of their graph on an overhead transparency. Teams use the overheads to display and compare their data

7. Student then compare and discuss their results. This can be facilitated by stacking team overheads. Discussion questions can include 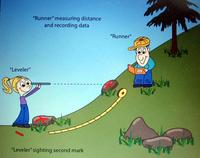 Measuring the Slope of a Real Hill

8. Students read and write the slope protocol in their journals. (Or you can give students the tools and have teams devise the protocol.) Class discusses the protocol so all teams understand the protocol.

9. Teams of students go to a nearby slope and measure the slope using the protocol. Sketch of how 2 students measure slope. ( PRIVATE FILE 50kB Mar3 08)

10. Students then plot the angle of the slope. Once their graphs are completed teams enter their data in the class data table and make a copy of their graph on an overhead transparency. Teams use the overheads to display and compare their data

11. Compare team data and transparencies; discuss differences, outliers and technique. Once the class agrees on how steep the slope is, compare that measurement to the slopes calculated from the map exercise.

12. Students use the comparison between slopes that have slid and slopes near their home and school. They then write a paragraph answering the question:does the student think a hill near them is more likely to sound.

NOTE: This is a great place to discuss the differences between slides on volcanic islands and slides on land. Several things contribute to sliding on volcanic islands. Foremost is that the layers of basalt are deposited gently dipping toward deep water. While basalt rock is hard, it is also brittle; consequently layered lava flows have many joints and fractures. The fractured flow can be compared to stacking bricks without cement. The joints between basalt flows become conduits for water and volcanic fluids that slowly weather the basalt to slippery clay - further destabilizing the island. Erosion of the surface of the island can deposit huge loads of sediment onto the underwater margins of the island. These deposits can slowly concentrate the mass of the island on the edges of steep underwater slopes until the underlying slope fails. Furthermore, volcanic activity can push up the center of the island, inflating it and further steepening the sloping lava flows. Earthquakes associated with volcanism often trigger these submarine landslides.

13. Homework: Students measure the slopes near their home and report to the class any additional seismic risk. This can be expanded into a report.

The unit will take about 4 hours depending on the skill level, motivation and discussion time allotted. Tangents may be very engaging so you may want to schedule more time. Students should do their own work in journals or notebooks that will be assessed at the end of the unit. Teams of 2 or 3 students are ideal, but this is dependent on how many maps or computers are available. If students have not used topographic maps recently, they should have some review before attempting to interpret the bathymetric map.

At least 2 landslides with measurable adjacent slopes can be found in the main Hawaiian Islands. One is on the SW side of the big island (156.04W, 19.276N), the other is north of Molokai (156.92W, 21.476N). Two more slides can be found but their adjacent slopes may be more difficult to measure. The most spectacular of these appears to have removed the entire northeast margin of Oahu (157.7W, 21.6N). Its debris field includes the massive Tuscaloosa Seamount and extends more than 100 km from the site of slope failure. A fourth slide can be found south west of Lanai (157.56W, 20.868N), that may also be difficult to measure the angle of the undisturbed slope.

Presenting photos of landslides and unstable slopes will spur discussion. The discussion can follow tangents to slope failure during wet weather or earthquakes, and mega-tsunamis. Mega-tsunamis have been well reported in the news. These news articles and diagrams are engaging to students.

Demonstration: A bucket of wet sand can be turned over on a table. The sand can be molded by the bucket, or be reshaped by packing into a more hill-like form. Students can consider the pattern of contour lines and draw examples on the board. As the sand dries it will slide, but more obvious will be to mimic a slide in the side of the sand with your hands. Have students draw the change in the contour lines on the board.

Prep: Collect materials. It is helpful to print and laminate maps of the landslide areas. Line levels are designed to hang on a string and can be found at most hardware stores for about $5. http://www.forestry-suppliers.com/product_pages/view_catalog_page.asp?id=4170 'For Example'

Class Data Tables: Examples are in the protocols. Student teams can be responsible for filling out their own data. Individual students can then be offered extra credit for finding errors in the data. Students ussually find errors by redoing calculations (for rise over run for example) or by comparing their teams results with another's ("They were right next to us and our slope is way different than theirs!"). This check may take 10+ minutes. When everyone is satisfied with the data then this becomes the class data and is used for the next step.

Organizing the slope measuring teams to construct a classroom topographic map will add about 1 hour data work to the basic plan.

Assessment of Students:
Checks for understanding can be made during the slide show and demonstration. Walk around and look in journals for pictures and descriptions of landslides during slide show. Following demonstration look for 2 contour line patterns that represent the sand mound before and after the "slide". Journals of student teams should be checked following the copying of protocols. A verbal explanation by the student confirms understanding. Team data and graphs can be checked during the discussion comparing class data.

Students are assessed by the completeness of their journal entries and the accuracy of their graphs. While journal entries don't have to be "correct", they should show that directions were followed and that answers are thorough.

Students use the comparison between slopes that have slid and slopes near their home and school. They then draw diagram(s) and write a paragraph(s) answering the question: does the student think a hill near them is more likely to slide.

At present there is no pre- and post-test, but these tests would allow further assessment of students.

Homework can be assigned for students to measure and map slopes near their homes and compare to the class slopes.

The following 3 links are to 3D visualizations of the landslide topography in the Hawaiian Islands courtesy of the Scripps Institute of Oceanography Visualization Library, Institute for Geophysics and Planetary Physics. They require iView3d to view them - it's a free download from

http://siovizcenter.ucsd.edu/library/objects/detail.php?ID=21 3D visualization of the headwall of the giant Wailau slide off Molokai.

http://siovizcenter.ucsd.edu/library/objects/detail.php?ID=18 3D visualization of the headwall of the Polulu slide at the north end of the big island of Hawaii.

http://siovizcenter.ucsd.edu/library/objects/detail.php?ID=176 3D visualization shows the bathymetry of the of the Hilina Slump, offshore of Kilauea Volcano on the east side of the big island of Hawaii