Impact of deforestation on slope stability

Hide
This image gives an overall view of the current land use in the Gordeleg catchment (Southern Ecuadorian Andes). During the last four decades, radical socio-economic and demographic changes induced high land pressure in the central Inter-Andean basins. This manifests itself in an upward movement of the agricultural frontier, whereby the natural vegetation is increasingly converted to agricultural lands. Details 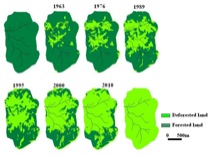 Hide
These maps show the evolution of the land use during the last four decades. The land use history was reconstructed from archived aerial photographs (1963, 1979, 1989, and 1995), complemented with a field survey in 2000. The land use of 2010 was predicted from a linear land use change model. The maps clearly show that deforestation is preferentially taking place in the river valleys: the presence of nearby rivers guarantees a permanent water supply for cattle-raising and, in addition, these areas act as access roads to the dense forest, due to their relatively easy accessibility. Details 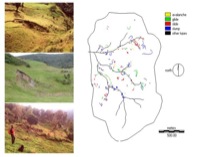 Hide
Photographs of three different types of mass movements that were found in the catchment. A detailed inventory of landslides was made by systematic field surveys. Four basic movement types were distinguished: falls, rotational slides, translational slides and flows. A total of 257 slope movements were recognized and mapped by GPS. Details 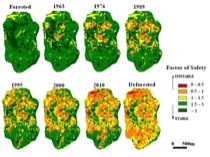 Hide
These maps show the evolution of the slope stability for a realistic land use change scenario. We built upon the results of our statistical analyses to explore the utility of a physically based slope stability model, which includes a dynamic soil wetness index using a simple subsurface flow model. The model provides a time-varying estimate of susceptibility to slope movement by linking land-use data with spatially varying hydrological and soil strength properties. Details

Slope movement is a widespread hazard in mountainous regions around the world. Consequently, not only considerable financial costs are suffered, but also major ecological and environmental problems arise in a larger geographical area. In developing countries world-wide, slope movement risks are likely to grow as increasing population pressure, together with economic development, are forcing more people to move to unstable hillside areas. In the Ecuadorian Andes, slope movement is an important regional problem, as sediment production by slope movement on hillslopes directly influences transport and deposition of material in downstream rivers and dams and morphological changes in stream channels. Since the 1960s, the increased population pressure together with economic development have forced the agrarian population to use potentially hazardous areas, which are less suitable for agriculture and rangelands, for cultivation (Vanacker and Govers, 2007; Figure 1). Today, episodic slope movements, often associated with intense rainstorms or accelerated soil saturation due to seepage from irrigation channels or reservoirs, are common. Typically, they comprise shallow failures in soil or regolith material involving rotational and translational slides and rapid flows of debris and soil material.

A variety of approaches are used to predict the areas that are particularly sensitive to slope movement. Several studies that used stochastic models have highlighted the importance of vegetation cover in controlling slope failure. This variable is often neglected in process-based slope stability models that usually base their prediction of slope failure upon topographical attributes, sometimes in combination with spatially varying hydrological parameters. By including dynamic soil wetness indices derived from simple subsurface flow models (such as the TOPOG model, O'Loughlin, 1986; Montgomery and Dietrich, 1994) in physically based slope stability models, it is possible to provide time-varying estimates of susceptibility to slope movement by linking land-use data with spatially varying hydrological and soil strength properties.

Such an approach was applied to the Gordeleg catchment (Southern Ecuadorian Andes) to evaluate the impact of land use change on slope stability. The Gordeleg study site consists of a 2.5 km2 drainage basin in the southern Ecuadorian Andes. Slope morphology is characterised by convex hilltops, steep linear slopes and large concave valleys. Altitude ranges between 3332 and 2980 m. The basin is underlain by horizontally layered Lower Pliocene to Upper Pleistocene volcanic tuffs. Soil properties are strongly related to the parent material and geomorphologic setting: in the valleys, isothermic vertic Luvisols are found, whereas on the hillslopes and ridges, soil development is slow and isomesic Cambisols dominate. The area has a cool tropical climate and receives about 800 mm of precipitation annually: precipitat ion is about 30 mm/month in the relatively dry season, i.e. from June to October, and abut 90 to 100 mm/month in the rainy season. This area was almost entirely covered by native forest in the early '60s, but clear cutting changed the landscape profoundly. Analysis of aerial photographs show that the forest cover in the catchment has declined from 86% in 1963 to 52% in 2000 (Figure 2). The conversion from secondary forest to grassland and/or cropland induces increased risk of shallow slope movement. During extended field surveys in 2000, a total of 257 slope movements were recognized and mapped by GPS (Figure 3).

To estimate the effect of clear cutting on slope stability, we linked our land use data with spatially varying hydrological and soil strength properties that were measured in the field (Figure 4). In addition, a steady-state hydrological model was used to provide time-varying estimates of the soil moisture. This information was used as an input for the infinite slope stability model (see input values in Figure 5). We show here the result of a realistic deforestation scenario: Past land use change includes a gradual fragmentation and clear cut of the secondary forests, as observed over the last four decades (1963–2000), and future land-use change is simulated based on a binary logistic deforestation model, whereby it was assumed that future land-use change would continue at the same rate and style as over the last 37 years (1963–2000).

Figure 4 illustrates the effect of deforestation on soil wetness and predicted slope stability. When the catchment is totally covered by forest vegetation, slope stability is mainly controlled by slope steepness: only some steep slope units (slope>75%) are susceptible to slope movement. Soil profile saturation is limited to the concave valley floors, which are drained by small streams. With increasing deforestation, seepage forces become more important than slope steepness to the development of slope movements. The wetness index of deforested slope units rises as the net rainfall increases and the saturated soil transmissivity drops. Besides, the additional strength provided to soil by roots declines rapidly after clearcutting. Progressively, the shear strength of a deforested slope unit is reduced and a larger part of the catchment becomes highly susceptible to slope movement.

The adopted approach allows assessment of the effect of past and future land-use change on slope stability. Here, a realistic deforestation scenario was presented: past land-use change includes a gradual fragmentation and clear-cut of secondary forests, such as observed over the last four decades. It also allows us to simulate the effect of other land-use change scenarios, e.g. a slow-down of deforestation or deforestation with native trees or exotic species, on the spatial pattern of slope stability. The model simulation clearly shows that present, past and (possible) future slope movement patterns can only be understood and simulated if the land-use dynamics and slope movement mechanics are jointly considered. Deforestation does not occur randomly within the landscape but is largely controlled by topogr aphy. As land use strongly affects slope stability, the spatial pattern of slope movements can only be understood and simulated if the deforestation pattern is taken into account.

« Geophysical prospecting on a complex rock glacier in the semi-arid Andes of Argentinia (Morenas Coloradas, Mendoza, Argentina)       The Largest Landslides on Earth »