Living on a slippery slope: Case studies of geologic hazards from the Wasatch Front, Utah 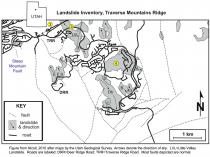 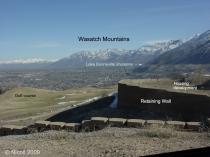 Hide
Figure 2. Little Valley Landslide (LVL) deposits. The golf course’s hummocky topography is an asset provided by the natural mass wasting of the Little Valley Landslide. Housing is being developed at sites above the retaining walls shown; the retaining walls are built along the fault line that has created the topographic break along the edge of Traverse Mountain (Figure 1). Details 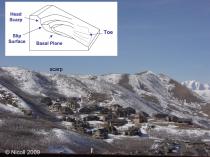 Hide
Figure 3. Photograph of housing development built within the Little Valley Landslide. A real estate brochure claims that one property here is “protected by a natural mountain cove… and is a great place to invest.” Inset: cartoon of basic geomorphic features of a landslide. Details 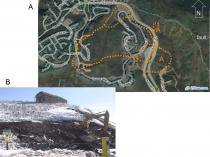 Hide
Figure 4. A. Zillow.com image of the housing development built on mapped landslide deposits, outlined in orange. “Landslide A” feature is labeled; it is a recent reactivation of the larger landslide unit outlined in orange. B. A house with a view was built above a landslide head scarp, and it is sited above another house that is under construction. Details

Throughout their history, humans have fought the natural elements; we build shelters, roads, hospitals and malls wherever we can engineer "solutions" and strategies that permit us to thrive, even in harsh places. Using our brainpower, braun, and emerging technologies (like air conditioning), our builders, bulldozers and insurance policies allow us conquer the landscape... or do they?

As population increases, "the built environment" encroaches places where Mother Nature reminds us of our vulnerabilities. This vignette examines some developed areas experiencing hazards in the Wasatch Mountain Front of Salt Lake City, Utah [Figure 1]. Here, houses are built on mountainous terrain that is affected by fires, floods and slope failures (Nicoll, 2010).

What are slope hazards? Slope failures such as landslides, debris flows, and mudflows occur when materials (soils, rocks, etc) move downslope when the force of shear stress exceeds the shear strength of the material. Slope movements occur as stress (force per unit area) acts on a mass of rock or soil. Assessing whether the landscape is stable, or whether a failure might occur requires analysis of forces in relation to the slope morphology, geotechnical parameters, and the substrate material. After a landslide becomes active, the slope will continue to fail. Various geologists, geological engineers and technical scientists assess landscape stability and create hazard maps (Giraud and Shaw. 2007).

What do unstable slopes look like? Even if you are a trained geologist with field experience, it may be difficult to recognize an unstable slope! Here, we examine a couple examples. In Figure 2, we look north (downslope) onto an ancient landslide deposit that moved off the Traverse Mountains and past the Steep Mountain Fault. The golf course was sited here due to the natural hummocky topography – hills and swales – that was created within the toe failure of a landslide. Recent construction work has extensively terraced this area. Along the fault scarp of Steep Mountain Fault, the developer has built a retaining wall.
All of the homes depicted in Figure 3 are built within actively deforming deposits of the Little Valley Landslide (LVL). The ridge line is made of weak rocks -- rhyolite volcaniclastics of the Keetly Formation-- and there is a head scarp where the rocks have detached from the original mountain face. The initial rupture of the LVL is dated to ~15,000 years ago, because the landslide protruded into the ancient Lake Bonneville; stratigraphic relationships suggest that the LVL is younger than the "golf course" landslide deposits. Figure 3 was taken from the road, looking east from the graded road. To construct this road, engineers removed approximately half the original landslide material. The ridge in the foreground of the photo (left side of the image) is a pressure ridge where ancient landslide material piled up.
The housing development in Figure 4 is situated upon a large landslide complex with multiple failure zones. The Landslide A has been deposited on top of another, older landslide deposit (outlined in orange) that was displaced by normal faults [Figure 1]. Much of the landslide material was removed to grade the road.


How active are slope failures? Today, residents along the Wasatch Front occasionally observe debris flows. About 808 acres of the hillside at Corner Canyon burned in 2008, and areas downslope of the fire scar experienced flooding, mudslides and debris flows after intense rainfall in June 2009. Later, on 19 August 2010, mudflows affected many residents of Draper after another intense rainstorm. The National Oceanic and Atmospheric Administration (NOAA) reports that about an inch of rain fell in a 15-minute period, and this mobilized mud and debris (see website links below). The news reported water, mud flows and rock debris in people's houses and the streets near the mountain (see links to articles in Deseret News). More than 70 homes experienced damage and several roads were closed due to flooding and debris flows. Mud and water swept away trees, manhole covers and cars, broke through retaining walls and windows, and filled up the basements of more than 30 homes along the Wasatch Front.

Why was this landscape developed? Since 2002, developers persuaded Draper City to annex and develop this land, using the argument that the property "tax base" would be lucrative. However, there have been many protests from geologists and engineers, who think the area presents significant risks. Since 2004, the developers have faced numerous technological challenges, slope failures, water rights issues, and safety violations, as well as the real estate crater following the market crash. Since 2008, several developers have gone bankrupt and many projects were aborted, with many homes presently bank-owned and saturating the market (Nicoll, 2010). One of the local controversies is the extent to which citizens should be advised of potential geologic hazards. For example, a hazards "information sign" developed by the Utah Geological Survey for posting at a park was opposed on the grounds that it would lower property values.

About the storms causing mudflows in Corner Canyon

Here is a link to a weather analysis for 19 August 2010 from the National Weather Service (with sound):