The Largest Landslides on Earth 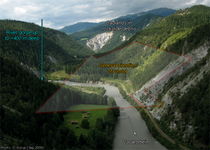 Hide
Breach channel of the Vorderrhein River through the 12-km3 Flims rockslide dam that had formed ~9 ka in the Swiss Alps. The river has not yet reached the base of the rockslide debris. Note train for scale. Created by the author of the page containing this file. Details
] 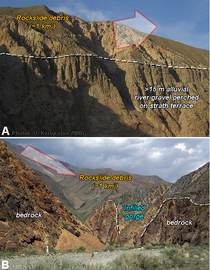 Hide
Green Lake, New Zealand, is a large pond that formed on top of one of the world's largest rock-block slides (27 km3). Only the mountains in the right background were not involved in this catastrophic slope failure. Created by the author of the page containing this file. Details
]

In landscape evolution, landslides are thought to play a prime role in controlling hillslope erosional response to tectonic, climatic, and anthropogenic forcing (e.g. Korup et al., 2007; Hewitt et al., 2008). Besides, landslides are a major geological hazard and frequently occur in the wake of strong earthquakes or high-intensity rainstorms such as tropical cyclones. Several studies have underpinned an empirical relationship between landslide frequency and magnitude (which entails a spectrum from less than a cubic meter to several thousands of cubic kilometers), although most of these studies typically concern a fraction of the full size spectrum only, i.e. the one containing the numerous smaller slope failures. Judging from reported frequency-magnitude relationships, the largest of these landslides are extremely rare with average return periods well beyond a human lifetime. So what is the largest landslide on Earth and in what geo(morpho)logical setting does it occur?

Answering this question calls for reviewing many different case studies and inventories, i.e. databases that contain varied information on the causes, triggers, geometry, and consequences of landslides. Such comparison reveals that the largest landslides on Earth mainly occur below sea level. One of the largest fully submarine slope failures, the Storegga Slide, is on the continental shelf 120 km west of Norway (Haflidason et al., 2004). It occurred around ~8.1 ka, and involved the geologically instantaneous detachment of 2400 to 3200 km3 of sediment, covering an area of 95000 km2. Increasingly detailed bathymetric mapping of the ocean floors has revealed many well-preserved landslide deposits of comparable volumes. While the largest of these submarine landslides are at least one order of magnitude larger than their terrestrial cousins, even bigger landslides have been found on planets and moons in the solar system.

With the exception of the early Eocene 3400-km2 Heart Mountain landslide, Wyoming and Montana (Aharonov and Anders, 2006), the largest terrestrial landslides typically involve the catastrophic flank collapse of volcanic edifices, producing highly mobile debris avalanches. One of the largest reported debris-avalanche deposits is Las Cumbres, Mexico (~81 km3). These landslides often travel beyond the 10-km mark and bury up to several thousands of km2 with sheets of hummocky volcanic debris. Upon entering drainage channels, debris avalanches may transform into lahars and hyperconcentrated flows, which further increase their mobility and impact range. Debris avalanches from volcanic islands may create tsunami upon hitting the ocean surface, while continuing their runout along the submarine flanks of the volcano into the deeper sea.

The largest terrestrial landslides of non-volcanic origin can often be found in tectonically active mountain belts prone to frequent earthquake shaking, high-intensity rainstorms, and slope undercutting, and thus high relief with steep hillslopes. However, the frequent occurrence of such dynamic loads on hillslopes cannot be reconciled with the rare occurrence of the largest of landslides. In other words, the stability thresholds required for triggering are either (a) exceeded very rarely, e.g. during very large earthquakes, or (b) as a consequence of gradual deterioration of hillslope strength, allowing detachment of large landslides at lower stress levels. Moreover, many of the largest landslides are not necessarily tied to high local relief, and a significant fraction has occurred in rather flat terrain, involving the detachment of many cubic kilometres of mass along low-gradient basal shear planes. Most of the largest terrestrial non-volcanic landslides involve bedrock regardless of whether it is igneous, metamorphic or sedimentary. Indeed, loosely consolidated Quaternary sediments may also be prone to large-scale catastrophic collapse, and the title of "largest terrestrial non-volcanic landslide" is claimed by, among others of similar estimated volume, the Pleistocene Baga Bogd earth-block slide, Mongolia (~50 km3; Philip and Ritz, 1999).

Currently we know of some 200 terrestrial landslides that have mobilised >1 km3 material each. Four such landslides occurred in the 20th century alone, while many regions of the world remain under-explored with regard to the geomorphic legacy of such extreme slope failures. In contrast, there are regions that seem to be particularly susceptible to extremely large landslides, such as North Island, New Zealand. There, the dissected hill country composed of soft upper Tertiary silt- and mudstones features clusters of huge (>1 km3) low-gradient landslides. These can be best appreciated from satellite imagery or shaded digital elevation models, as they form conspicuous deviations from regional trends of drainage pattern and host a number of ponds on their surface or margins. The upper Indus Basin, Pakistan, hosts the densest cluster of large (>1 km3) catastrophic rock-avalanche deposits known to date, and many of these landslides have dammed major mountain rivers, creating extensive valley fills, and profoundly altering long-term fluvial sediment transport.

Although rare, it is estimated that single large landslides may have accounted for 1-10% of Holocene erosion rates in mountainous catchments during the Holocene. The contribution of large river-damming landslides to sediment yields can be substantial, once fluvial erosion is able to dissect the dam and entrain the landslide debris. On a global comparison, such point-source contributions of single large landslides rival the fluvial specific yields (expressed as the mean annual mass of sediment trasnported per unit upstream drainage area) following regional landslide episodes involving up to tens of thousands of smaller landslides, or even the extremely high fluvial and hyperconcentrated yields of pyroclastic debris in the wake of volcanic eruptions. Sediment delivery is often extremely pulsed and exceeds 105 t km-2 yr-1 annually during the rapid erosion of debris from large catastrophic bedrock landslides. Over the course of a few hours, however, debris flows during catastrophic breaching of river-blocking landslides may produce unmatched sediment yield peaks of >109 t km-2 yr-1, thus constituting the most effective short-term sediment transport events in mountain rivers.