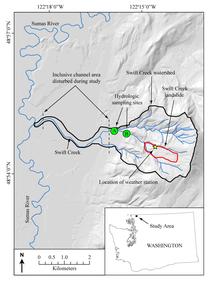 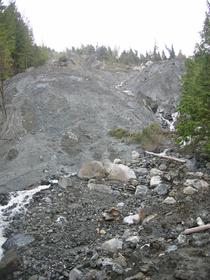 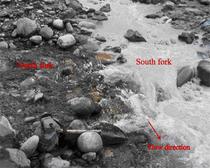 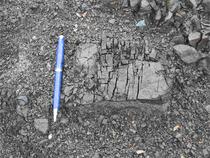 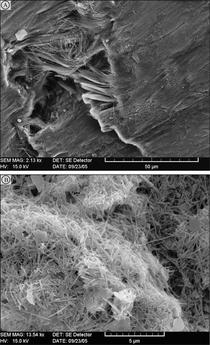 The Earth-sculpting processes of weathering, erosion, sediment transport and deposition occur everywhere on Earth's surface. But the rate that these processes operate on the continents varies greatly depending on rock type, topographic relief and climate. The degree to which these natural processes affect human lives varies as well. More than any time in our history, humans now have the means and desire to live in scenic places (Mountains! Coasts! Plate boundaries!) that also present abundant geologic hazards.

The western edge of the North American plate has been a geologically busy place for the last few hundred million years. Two consequences of the nearly continuous sliding of plates past one another vertically (subduction) or horizontally (transform) are the steep mountain topography and the exotic rock types that make up the mountains in the Pacific Northwest. The forested front range west of the glacier-covered North Cascades of Washington State includes thrust slices of many types of crust, including ocean crust. When hydrothermally altered on the sea floor, the ultramafic rocks of ocean crust metamorphose into serpentinite. A large piece of serpentinite makes up much of the west side of Sumas Mountain-- and abundant faulting has left this already weak rock type highly sheared. The steep 1000 m high ridge known as Sumas Mountain is the first barrier encountered by Pacific moisture from the Puget Sound (also known as the Salish Sea). As the clouds rise against the mountain, they produce abundant rainfall. These ingredients - weak rock, steep slopes, recent glaciation and abundant precipitation - have combined to create a problem of regional significance: the Swift Creek Landslide.

Over 2 km long and 0.5 km wide, the Swift Creek Landslide is a complex slump/earthflow that causes Swift Creek to run milky white with serpentine-derived sediment. The high sediment load in the creek has required that the streambed be dredged annually (>105 m3) to prevent flooding of local agricultural land. But the situation is more complicated because chrysotile, the most common serpentine mineral at Swift Creek, is a sheet silicate that has the usual habit of rolling into tiny fibers we call asbestos. The US Environmental Protection Agency has determined that there is sufficient asbestos in the Swift Creek sediments to pose a hazard to people who 'interact' with the sediment over many years. Any engineered solution to the Swift Creek situation will be very expensive ($10s to $100s of millions).

How can geomorphologists contribute to the effort to understand and mitigate the hazards posed by the Swift Creek Landslide? We are working to determine:


In addition, hydrologic modeling will predict the discharge and sediment flux from the watershed under different climate conditions. These studies will allow engineers to design sediment retention structures of appropriate size and residence time. The intersection of tectonics, climate and humans will lead to more situations like Swift Creek that require the wide-ranging problem solving of geomorphologists.