Description of cooperative exams from the Course Design Tutorial

Cooperative, two-stage, or pyramid exams are all names given to exams where students answer some exam questions independently, turn those answers in, and then answer the same questions, new questions, or both in cooperative groups. 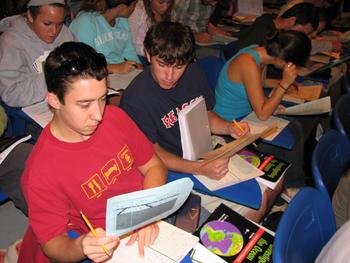 We asked participants of the Early Career workshops who have used cooperative exams in their classes to describe their experiences. Here are their comments.

I implemented cooperative exams in a two-course sequence that could be described as Atmosphere/Ocean Dynamics I and II, broken across fall and spring semesters with numbers ranging from 13 to 20 students per class. Here are details of admin and a summary of pros/cons of my experience.

I left it up to students before each exam whether they wanted to have a group part for that particular exam. I was straightforward in explaining why I thought it was a "win-win" idea (to capitalize on the brief periods when I have more of their attention than usual and to make the exams an even stronger teaching tool, while giving them a small boost in grade). Not surprisingly, the vote before each exam showed the overwhelming consensus was yes.

I gave 3 exams and a final, all of which consisted of derivations and open-ended questions (no multiple choice/true-false/fill-in-blank). I would typically weight the group portion 12-18% of the total. I would give them 3-4 questions, usually 1 they'd not seen before and 2-3 others that were either identical from the individual portion (or identical with numbers/equations changed slightly).

A few positives: I definitely think the cooperative portion reinforced learning - I purposely selected the more difficult questions for the group part and noticed that, in general, students who performed poorly on their own did much better the 2nd time around. I also noticed that my strongest students seemed to enjoy the challenge of quickly explaining to their peers how to solve/derive/answer these questions.

A negative: I didn't restrict student movement in the classroom during the cooperative portion, thus in my smaller sections, I ended up with nearly 100% identical solutions - as the class formed a group of the whole. While it made grading easier, it gave a voice to only one or two of the strong students and the weaker ones just listened/copied (instead of the back-and-forth discussion that I had envisioned).

Final point: the exams were designed to be hour-long, given in a 2-hr block of time, so I had many students finishing early and sitting idle while waiting for their peers to finish (and I did not set a firm time limit for the individual portions). Not sure how to rectify this, beyond setting a time limit for the individual part, and it was discussed toward the end of each semester by students as a reason not to have the cooperative version (although students ultimately decided they could wait 10-20 minutes for their peers to finish).

I tried a different strategy in an intro oceanography class with 260 students. I let students optionally re-take the test questions online with full access to notes and books and allowing them to work with other students. The online portion counted as 20% of their test grade if it improved their in-class exam grade.

For the midterm, the online portion contained all of the 50 multiple choice questions from the in-class test. For the final exam, I selected 26 of the hardest questions to have them re-take. In both cases, some of the questions were math problems. I gave them about 36 hours to complete the online questions.

[Our institution] uses a variant of the Moodle class website software, which allowed to me to easily import my test questions to the web, scramble the a/b/c/d choices for each student, and automatically grade their answers.

The students really liked having this option, and I think it helped them learn the right answers to questions they missed in class. I plan to use the same strategy again next year. It was really easy and there didn't seem to be any down-side, so I highly recommend it.

I used [cooperative exams] in my Structural Geology class (33 students). They loved it. For an upper division class like this, I liked to put on straightforward questions that nonetheless involved one or two more interpretative step than a normal test question would. For instance a question that described a strike-slip fault system in terms of its orientations, but didn't provide a picture, and asked the students to determine what type of faults (normal, reverse, strike-slip) would occur at horsetail terminations that trended one way away from the main fault. The students got in good discussions explaining different steps in the interpretation to each other. Also a lot of my students wish to eventually work for petroleum companies, so they appreciated the opportunity to have (relatively) high stakes group decision making.

My solution to the waiting problem in the two hour exam: I wrote challenging extra credit problems on the white board at the 1 hour mark (i.e., when there was half an hour left in the individual part of the exam). The extra credit problems were worth about 1/4 of the points they would have been assigned had they been part of the main body of the exam, so that drop in point value ensured that people who couldn't get to them in time weren't overly perturbed at the loss of an opportunity for more points. Nonetheless it gave the faster students a chance to stay profitably busy until the cooperative part.