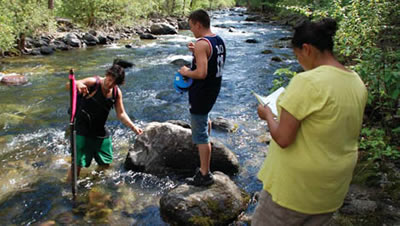 Salish Kootenai College is located in Pablo, Montana on the Flathead Indian Reservation in western Montana. Beginning in 1977 as a branch of the Flathead Valley Community College, the college first became accredited in 1984 by the Northwest Commission on Colleges and Universities. The college currently serves upwards of 1,100 students, of whom approximately 75% are Native American, representing 66 tribes and 20 states and provinces in fall 2011. Salish Kootenai College offers 2-year Associate's degrees, 4-year Bachelor's degrees, and Certificates of Completion in a number of areas. The Natural Resources Department houses the Hydrology Degree Program, along with two other programs--Forestry and Environmental Science. The Hydrology Degree Program was the first of its kind to be accredited at a tribal college or university in fall 2010. As of August 2012, the program had enrolled 21 students, and was expecting its first graduate in December 2012. At that time, there were 17 active students, of whom 82% were Native American.