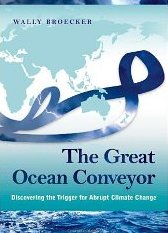 Time - 10:00 am Pacific | 11:00 am Mountain | 12:00 pm Central | 1:00 pm Eastern
Duration - 1 hour.
Format - Online discussion via phone and Elluminate web software on the book described below.
Registration - There is no registration fee, but registration is required to save a space (and because space is limited to 10, be sure you can commit before registering). Registration closes when the spaces fill or one week before each event, whichever comes first.
Contact - For questions contact Karin Kirk or Katryn Wiese (kkirk at carleton.edu or katryn.wiese at mail.ccsf.edu).

During our 1-hour book club discussion we will share thoughts from the book and discuss how material or ideas from this book could be useful for teaching in an undergraduate setting. Prior to the book club discussion, participants will be encouraged to share their impressions of the book via a threaded discussion.

"Wally Broecker is one of the world's leading authorities on abrupt global climate change. More than two decades ago, he discovered the link between ocean circulation and climate change, in particular how shutdowns of the Great Ocean Conveyor--the vast network of currents that circulate water, heat, and nutrients around the globe--triggered past ice ages. Today, he is among the researchers exploring how our planet's climate system can abruptly "flip-flop" from one state to another, and who are weighing the implications for the future. In The Great Ocean Conveyor, Broecker introduces readers to the science of abrupt climate change while providing a vivid, firsthand account of the field's history and development." "Could global warming cause the conveyor to shut down again, prompting another flip-flop in climate? What were the repercussions of past climate shifts? How do we know such shifts occurred? Broecker shows how Earth scientists study ancient ice cores and marine sediments to probe Earth's distant past, and how they blend scientific detective work with the latest technological advances to try to predict the future. He traces how the science has evolved over the years, from the blind alleys and wrong turns to the controversies and breathtaking discoveries. Broecker describes the men and women behind the science, and reveals how his own thinking about abrupt climate change has itself flip-flopped as new evidence has emerged.""Rich with personal stories and insights, The Great Ocean Conveyor opens a tantalizing window onto how Earth science is practiced."

"Wally Broecker is the Newberry Professor of Earth and Environmental Sciences at Columbia University. His books include Fixing Climate: What Past Climate Changes Reveal about the Current Threat--and How to Counter It and Chemical Oceanography. He is a member of the National Academy of Sciences."

Activities and materials for teaching about paleoclimate and abrupt climate change

Modeling the oceanic thermohaline circulation with STELLA - This activity describes the construction of and then experimentation with a STELLA model of the thermohaline circulation in the north Atlantic. Based on a famous paper by Stommel (1961), this model exhibits two stable states or attractors. The dynamics of this system are relevant to understanding episodes of abrupt climate change such as the Younger Dryas.

Gulf Stream Heat Budget and Europe's Mild Climate: A Problem-based Learning Activity - Students are presented with a scenario to recommend whether the Gulf Stream is responsible for keeping Europe warm and the potential effects if polar ice were to continue melting.

Rayleigh Fractionation Visualization - An Excel spreadsheet gives an account of Rayleigh fractionation, the progressive removal of the heavier oxygen isotope as a moist air parcel moves from the subtropics to the high latitudes. This exercise is useful for the interpretation of ice core paleoclimate records.

Sediments and the Global Carbon Cycle - This is a series of exercises designed to introduce undergraduate students to the role of sediments and sedimentary rocks in the global carbon cycle and the use of stable carbon isotopes to reconstruct ancient sedimentary environments. Students will make some simple calculations, think about the implications of their results, and see an optional demonstration of the density separation of a sediment sample into a light, organic fraction and a heavier mineral fraction.

Using Real Data from Ices Cores and Salt Cores to Interpret Paleoclimate - Students use four paleoclimate curves from the past 150,000 yrs to make interpretations about temporal and spatial aspects of paleoclimate and to use that data to make predictions about future global climate trends.

Ice Core Exercise - This assignment (for upper-division/graduate students) provides exposure to ice core data, problem-solving to register data sets, technical challenges in data manipulation and statistics, and an opportunity to synthesize across time and space.

Fathoms, Ship Logs, and the Atlantic Oceanand Introduction to the structure of the ocean using CTD data - These are high school level activities for teaching physical oceanography

Submitted at the 2008 Cutting Edge workshop on teaching climate change using ice core data. These ideas are not fully-formed teaching activities but rather they are outlines that could be developed into fully formed activities.

Bipolar Climate Puzzler - This is an outline for a paleoclimate activity that have students develop graphs of data from the GISP and Vostok core data, then compare long-term scale (multiple glacial cycles) and short-term scale (9,000 - 15,000 year time period) data from Greenland vs Antarctica.

Bring it Home: Evidence for Abrupt Climate Change - This is an idea for an activity that uses pollen data and ice core date to compare the timing of major temperature change with pollen record and examine abrupt changes in plant communities.

Climate change and interpreting ice core data - Designed for an upper-level course, this activity idea involves both individual and group work to interpret and compare graphs for CO2, volcanic, and solar forcings over the past 1000 years and temperature records over the past 2000 years.

How do polar and tropical ice cores correlate? - Designed for an upper-level course, this activity idea involves students downloading and evaluating data from specified ice cores in Greenland and Bolivia in an attempt to recognize and interpret rapid climate change events.

Paleoclimatology: How Can We Infer Past Climates? - A primer on how researchers use climate proxies to infer past climate and a list related links for more information.

Stable Isotope Primer and Some Common Uses in Hydrology - This page offers a primer on stable isotopes, including what they are and how they can be used in hydrology; it also provides links to related resources.