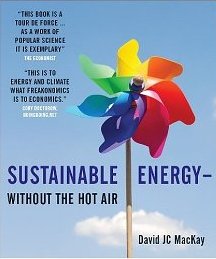 Time - 10:00 am Pacific | 11:00 am Mountain | 12:00 pm Central | 1:00 pm Eastern
Duration - 1 hour
Format - Online discussion via phone and Elluminate web software on the book described below.
Goals- To facilitate a discussion of alternative energy topics as presented by this book and to share ideas of how concepts from this book can translate into our own courses.
Registration - Registration is required to save a space (and because space is limited to 10, be sure you can commit before registering). Registration closes when the spaces fill or one week before each event, whichever comes first. There is no registration fee. For questions contact Karin Kirk or Katryn Wiese (kkirk at carleton.edu or katryn.wiese at mail.ccsf.edu).

online version of this book | see this book at Amazon

"Addressing the sustainable energy crisis in an objective manner, this enlightening book analyzes the relevant numbers and organizes a plan for change on both a personal level and an international scaleâ€"for Europe, the United States, and the world. In case study format, this informative reference answers questions surrounding nuclear energy, the potential of sustainable fossil fuels, and the possibilities of sharing renewable power with foreign countries. While underlining the difficulty of minimizing consumption, the tone remains positive as it debunks misinformation and clearly explains the calculations of expenditure per person to encourage people to make individual changes that will benefit the world at large."

David MacKay is a professor in the department of physics at Cambridge University, a member of the World Economic Forum's Global Agenda Council on Climate Change, and a regular lecturer on sustainable energy.

Resources from the book: