The Vostok research station is located near the center of the Antarctic ice sheet (78°S 106°E). Ice core samples taken at the Vostok station are used to collect data on historical carbon dioxide levels. The data consist of measurements of the percentage of atmospheric gasses, such as CO2 in fossil air bubbles that have been trapped in snow flakes and compressed into ice over 400,000 years old. Data are archived at NOAA's World Data Center for Paleoclimatology and represents geochemical data spanning 3,623 meters and over 400,000 years.

Hide
Ice core sample from Greenland; photo taken by Mark Twickler.
The Vostok station represents a collaboration between Russian, US, and French scientists. Ice cores taken from the Vostock station contain a record of atmospheric gas composition. Measurements of 'fossil' air trapped in bubbles in ice cores allow scientists to reconstruct historical fluctuations in green house gasses, such as CO2. Measurements made on ice cores taken from the Vostok station provide a pre-historical record of CO2 variations, providing a natural baseline that can be compared to current CO2 levels (380 ppm) that are influenced by human activity. Studies of ice cores also provide a history of glacial cycles and ancient fluxations in atmospheric gas composition, with CO2 levels ranging from 180 ppm during periods of lower temperatures to 280 ppm during warmer periods. Measurements of isotopes, such as deuterium, are also used as a proxy for temperature.

This dataset can be used to teach the following topics and skills in geochemistry and paleoclimatology: 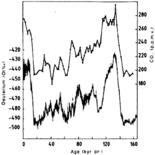 Users can choose a specific dataset of interest (such as methane levels) and download data in HTML tabular format (often from several different scientific sources).

Ice core samples are obtained by drilling a long cylinder of ice (approximately 5 inches in diameter). The core is separated into 5 meter long segments and stored for further analyses. Electrical measurements are performed and stratigraphy is analyzed. Ice from the core is melted to measure the percentage of CO2 and various chemical techniques such as mass spectrometry and gas chromatography are used to analyze isotopic composition.

Sources of error in reconstructing climate history using ice core data include determining age of the ice and correcting for gas exchange in snow prior to trapping of gas within bubbles enclosed in the compressed ice. Given the current understanding of glacial cycles, dating determined by techniques such as flow and compression modelling or using deuterium as a proxy for age yield robust measurements.

Scientific References that Use this Dataset

There are several research articles that describe the CO2 record of the Vostok Ice Core data: