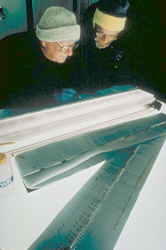 This workshop has already taken place. You can see the presentations from the workshop on the workshop program page, see ideas for teaching with ice core data and look at the workshop photo gallery.

Ice cores from Antarctica and Greenland provide one of the most important archives of the changing climate. Not only do ice cores reveal an ongoing record of past climate, but they also shed light on climate processes such as long-term and short-term oscillations, drivers of climate change and the timing of climatic events. For example, the preservation of air bubbles allows for direct measurements of carbon dioxide and methane. This has enabled investigation of the empirical relationships between greenhouse gases and temperature change.

Numerous papers describing analyses and interpretations from ice cores regularly appear in the leading scientific journals and certainly are at the cutting edge of climate science. However, for many teachers of college-level geology, biology, and environmental science, the basics of how ice cores are dated, how interpretations of temperature are made from proxies, and how gas concentrations are measured remain difficult concepts to grasp. As a result, the science that flows from ice-core research may be challenging to present to undergraduates.

This workshop was part of the celebrations for the International Polar Year , and is co-sponsored by the http://sites.nationalacademies.org/PGA/biso/INQUA/PGA_068141 , the American Quaternary Association and On the Cutting Edge workshop series. The workshop was held in conjunction with the American Quaternary Association biannual meeting at Penn State University in June, 2008, and builds on a previous workshop sponsored by these groups that was held in August 2006.

This workshop was part of the On the Cutting Edge professional development program for current and future geoscience faculty, supported by the National Association of Geoscience Teachers with funding provided by a grant from the National Science Foundation - Division of Undergraduate Education . This workshop was built upon prior workshops, including Teaching Climate Change: Lessons from the Past.