During the 2008 Cutting Edge workshop on teaching climate change using ice core data participants were asked to work in small groups to brainstorm for ideas to bring ice core data into the classroom. These ideas are not fully-formed teaching activities (such as are found in the classroom activities collection), but rather they are outlines that could be developed into fully formed activities. 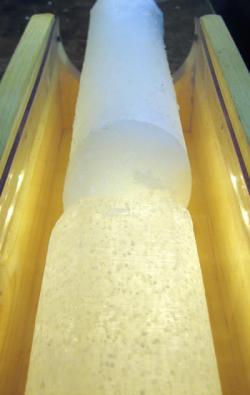 Two ice cores from Antarctica. In the core in the foreground, gas bubbles are visible. The core in the background contains a volcanic ash layer.

Debate: Be it resolved that global warning is anthropogenic, not natural

An ice-sheet modeling exercise: Theory, data, and the importance that the twain shall meet

Sea Ice Index: How to use data and images from the National Snow and Ice Data Center

How do polar and tropical ice cores correlate?