In physics, the "two-body problem" describes the gravitational field created by two celestial bodies. In academia, the same term describes the situation encountered when both members of a couple are applying for jobs. 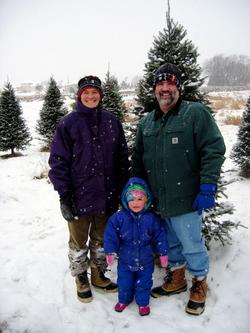 Hide
Lisa Lamb, Ayuna Lamb-Hickson, and Tom Hickson. Lisa and Tom are tenured faculty in the geology department at the University of St. Thomas, in St. Paul, MN, and were hired simultaneously there, to fill two existing positions. Photo courtesy of Tom Hickson.

Dual career couples face additional challenges in the job search process: choosing whether, when and how to reveal to prospective employers that your spouse is also looking for a job; deciding whether (and for how long) you and your spouse are willing to live apart for the sake of one or both of your careers; and even choosing how you (as a couple) will make choices. As more and more women earn PhD's in science, the number of dual career academic couples in science is growing. The resources below illustrate some of the (successful!) choices and strategies available to dual career couples.

Here are several examples of dual career couples in the geosciences. While every couple is different, these case studies may give you some ideas about how other couples have handled situations that you are facing or may face in the near future.

Articles from the Chronicle of Higher Education