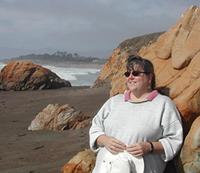 Hide
Linda Reinen. Photo courtesy of Linda Reinen and Pomona College.
Most of the information on this page is from an interview conducted by Carol Ormand on February 27, 2006.

Linda Reinen and Eric Grosfils are professors in the Department of Geology at Pomona College, in Claremont, CA. Pomona is a small, highly selective liberal arts college, with about 1500 students. Linda is a structural geologist with expertise in fault mechanics, and Eric is a planetary geologist with expertise in volcanology. They were hired to share a tenure-track position. Six years later, the college expanded their single position to two full-time positions.

Jump down to:
Offered a chance to share
Creating a fair contract
The challenges of a shared academic position
The challenges of dual academic careers in geology
The benefits of working with your spouse
Advice for dual career couples

Eric and Linda both earned their PhDs from Brown University, in Providence, RI, but Linda finished two years before Eric did. She took a job out of state, and they spent those two years in a long-distance relationship. By the end of that time, they wanted to find a way to live in the same place. As Eric entered the job market, they both applied for jobs that interested them individually, but only in locations where the other person would be likely to find some kind of work—including such options as teaching at a nearby community college or high school.

Fairly early in their search process, before either one had had any on-campus interviews, both Linda and Eric found out that they were in the "top ten" list of candidates for the Pomona job. (While their areas of specialty differ somewhat, both often take a quantitative, physics-based approach to solving geological problems. Pomona was one of the few places where both of them had applied.) At this point, they mentioned to the chair of the department (who was also chair of the search committee) that they were partners. He asked whether they'd be interested in sharing the position. Eric and Linda said yes, and from that point forward their application went through as an application to share the position.

When Linda and Eric were hired, Pomona made it clear that their position would not grow into two positions. After they'd been at Pomona six years, however, the college instituted an environmental analysis program. The mineralogy/petrology professor became the director of that program, although he was still expected to teach mineralogy and petrology. That left room for the department to add a faculty line, and they were asked if they'd like to expand into two full-time lines. Linda and Eric chose to expand from their shared position to two full-time positions, knowing that the department would not be losing expertise in mineralogy and petrology as a result.

When the time came to negotiate a contract for their shared position, Eric and Linda put together a contract that they felt was fair for all parties. Evidently the college agreed, as they accepted the terms without any substantive changes. In the process of researching shared position contracts, Eric was surprised to find out that many specify that evaluation for tenure is based on a half-time teaching commitment, but a full-time research expectation. Linda speculates that this is because institutions think that only a full-time researcher could stay current in his or her field. However, Linda and Eric agree that the contractual expectation for a half-time employee ought to be half-time work; it should be up to an individual faculty member in a shared position to decide how much time he or she needs to devote to research in order to stay current.

The challenges of a shared academic position

Sharing a position in academia came with a wide range of challenges. Living on one faculty salary in the L.A. basin created some financial pressure. Although both Eric and Linda were successful in supplementing their salaries with grant money, they could not count on that extra income. In particular, when they decided to buy a house, they needed to be able to make mortgage payments on their single salary.

In addition, their position was often confusing to students. On the one hand, their contract specified that each of them would do half as much as a full-time faculty member, in teaching, research, and service, and this was something the College under most circumstances was very careful to honor. However, students don't always understand what it means for faculty members to be half-time; many expected both Linda and Eric to be available all the time.

When Eric and Linda arrived at Pomona, they lunched together, sat together at faculty meetings, and generally spent their time together. After all, they were each other's best friends, and they didn't really know anyone else. That and their membership in a very small department led to a concern there would be a perception of them as a "voting bloc," in spite of the fact that they didn't always agree with each other. As time passed, Linda and Eric made a conscious effort to get to know other people at the college, spending less time with each other while they are on campus. That has ameliorated their "voting bloc" image, and of course has also expanded their circle of friends.

One curious side-effect of sharing a faculty position is that Linda and Eric were invited to a lot of college functions in their first years on the job, something that occurs regularly with young faculty but which held extra nuances at times when they were introduced as "the shared position couple."

The challenges of dual academic careers in geology

Now that they are both full-time faculty members, Eric and Linda face a few new challenges. The biggest one is related to chairing a small department: Eric has just stepped down as chair of the department, and it is now in Linda's hands. So both have had to face the twin challenges of being fair and of appearing to be fair. Fortunately, Pomona has some conflict of interest policies that help with this. For example, financial decisions that would benefit either the chair or his/her partner need to be signed off by a dean. Other decisions, such as class scheduling, are potential areas of conflict. Linda and Eric credit their colleagues with being quite reasonable, saying that this hasn't led to any problems. It's just something they're aware of when one makes decisions that affect their spouse.

The benefits of working with your spouse

"It's great! I get to work with my best friend."
Despite all of the challenges, Eric and Linda find much to appreciate in their dual academic careers:

Linda and Eric offer both general and specific advice for couples pursuing dual careers in academia. First, Linda says, when planning for the future try to be flexible in what you envision as acceptable options. The greater your flexibility, the greater your chances of finding something that works for both of you. Eric adds, be smart about how you approach the job search process. When you're applying to jobs, look into how those schools consider hiring couples. Shared positions have great advantages, to the institutions as much as to you—but don't assume they know that. If they've never considered a shared position before, they may not want to think through the logistics of how it would work for them. You might have to do that work for them, presenting them with an offer that appeals to them, to get them to give your application the consideration it deserves.