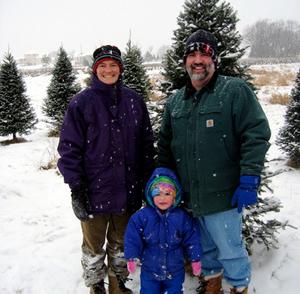 Hide
Lisa Lamb, Ayuna Lamb-Hickson, and Tom Hickson. Photo courtesy of Tom Hickson.
Most of the information on this page is from an interview conducted by Carol Ormand on January 25, 2006.

Lisa Lamb and Tom Hickson are professors in the Geology department at the University of St. Thomas, in St. Paul, MN. Tom and Lisa were hired simultaneously, to fill two tenure-track positions; when they were hired, they were a two-person department. The university was looking for two energetic people to revamp the curriculum and revitalize the department. They both received tenure in December, 2005. In the time since they took over the department, it has grown to three full-time faculty members, the number of majors has skyrocketed, they have created opportunities for student research, and they have started a family. Obviously, they've been busy!

Jump down to:
Two job searches, two jobs, one university
The challenges and rewards of dual academic careers in geology
Strategies for meeting the challenges
Advice for dual career couples

When Lisa and Tom were looking for jobs, they wanted to find positions in the same place, but not necessarily both in academia. Lisa, in particular, was open to the possibility of a non-academic job. (At the time, Tom was a post-doc at the St. Anthony Falls Hydraulics Laboratory at the University of Minnesota and Lisa was a visiting assistant professor at the University of St. Thomas, filling in for a faculty member who had passed away unexpectedly.) So, they each conducted a job search, applying for any positions that appealed to them, in their respective disciplines. They simply planned to apply for what they wanted, and to see what came of that. As it turned out, each made the short list at several colleges and universities, including (in both cases) the University of St. Thomas.

As they interviewed on various campuses, each of them brought up the question of their geologist spouse. In one case, Lisa says, the university was very savvy about spousal hires. They had a university-wide policy of helping spouses (academic or otherwise) to find work in the area, and there were already two couples in their geology department. They would have provided, at the very least, office space and an adjunct position for Tom, with the possibility that it would grow into something more over time. Other places they interviewed, however, were unprepared for the question of what the institution could do for the hiree's spouse. In one case, Tom withdrew from the short list after his on-campus interview, because of the institution's inability to offer any kind of assistance finding or creating a position for Lisa.

Both Tom and Lisa interviewed at the University of St. Thomas. By this time, (they later heard) the search committee had noticed that two of their candidates lived at the same address. However, Lisa says, the committee members were afraid to ask any illegal questions, so it was up to Lisa or Tom to raise the topic of their relationship to the search committee. Tom brought up the topic in his discussion with one of the search committee members. As it turns out, raising the issue was a good strategy: he and Lisa had both gotten their Ph.D.'s from Stanford, and had even worked in the same research group, though on different projects with different advisors. Bringing up their relationship provided an opportunity to discuss how the work each of them does is different, yet also how it dovetails. The university was seeking two energetic people who would work well together. Candidates with a history of working well together, on overlapping but distinct research interests, must have been appealing.

The challenges and rewards of dual academic careers in geology

Lisa and Tom agree that the biggest challenge of being a dual career couple is time management. Because they live and work together, work spills over into their personal lives, eating up as much time as they allow it to. And, now that they have a family, coordinating their schedules has become an even greater challenge. The hardest thing about that, they say, is not getting to be in the field together—while one does field work, the other takes care of their daughter, Ayuna.

On the positive side, Tom and Lisa describe several benefits of being a dual career couple. Because they are both geologists, they understand the details of each other's work. In fact, they work on complementary aspects of the same research problems; Tom studies sedimentation in basins, while Lisa analyzes their structures. Before they had Ayuna, each could be a field assistant for the other, so that field work was actually a time to be together—in contrast to the separation most geologists experience when they go to the field. Now, although they do field work separately, they do research together. In addition, because they are in a small department, their schedules are quite flexible, allowing them to coordinate their time commitments.

Strategies for meeting the challenges

Lisa and Tom have come up with several strategies for managing their time, and in particular for making time for their personal lives:

The other strategy Lisa and Tom have found helpful is distinguishing between their personal and professional relationships, and staying within their professional roles at work. They try to treat each other the same way they would treat any other colleague, to keep their personal lives from "spilling over" into work.

Tom and Lisa both emphasize the need for dual career couples to make time for their relationship, and to use that time to communicate with each other. This may seem paradoxical, since dual career couples may spend more time together than most couples. But the essential thing is to set aside some of that time for personal time.

If you are part of a dual career couple on the job market, they point out that your chances are best if you are both strong candidates. In fact, Lisa says, this can motivate you to work even harder than you would if you were by yourself. And, although departments may not know it yet, hiring a dual career couple can be advantageous to them. If you do both find jobs in the same place, and you're happy with those jobs, you'll be very likely to stay. You'll be committed to your department and to the school, and you'll both want to get tenure. If you encounter departments that haven't thought through this possibility before, Tom points out, it may be worth your while to sell them on the idea. Describe to them how some other departments have made it work, and the advantages you and your spouse can offer. After all, who wouldn't want to hire two energetic people who work well together?