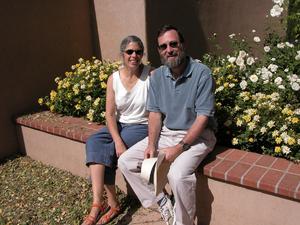 Hide
Dave Gutzler and Jane Selverstone. Photo courtesy of Jane and Dave.
Most of the information on this page is from an interview conducted by Carol Ormand on April 17, 2006.

David Gutzler and Jane Selverstone are professors in the Department of Earth and Planetary Sciences at the University of New Mexico, where they have been since 1995. UNM is a public research university. Jane and David both earned their PhDs from MIT, in metamorphic petrology and meteorology, respectively. After ten years with one or the other of them being on "soft money," the University of New Mexico hired them both with tenure.

As Jane and Dave finished their PhDs and began searching for jobs, their only "strategy" was to avoid having to commute. Neither of them was interested in having a long-distance relationship. That limited their opportunities significantly; both of them turned down excellent job offers when the other was unable to find work in the same area. They jointly interviewed at several places that had one tenure-track position, and could offer an office and PI status for the other person; however, Dave and Jane were not willing to sacrifice one person's career for the sake of the other's. This elicited some strong reactions. In fact, some department chairs were offended when Dave or Jane turned down their offers. Dave explains, "People were simply flabbergasted that a great job offer would be declined for the sake of a spouse, with nothing else in hand that was at all competitive." For six years, they stayed in Cambridge, while Jane taught at Harvard and Dave was funded by "soft money" at a research company. When Jane's department opted not to put her up for tenure, Dave took a position in Boulder, Colorado, and Jane took her turn on soft money.

Several years later, when a metamorphic petrology position became available at the University of New Mexico, UNM approached Jane and encouraged her to apply. When she asked what they could do for Dave, the Dean and Provost created a position for him, and hired both of them with tenure. This was particularly important to Dave, because at the time there were no other atmospheric scientists on the faculty. Had he had to apply for tenure, he would have been concerned about the dearth of faculty members on campus qualified to assess his research. Being hired as a tenured faculty member eliminated that concern. Jane and Dave feel very fortunate to have ended up with two tenured positions at the same institution.

Challenges of two careers in academia

As tenured professors, the challenges Jane and Dave now face pale in comparison to their earlier struggle for both of them to find work in the same place. However, no situation is devoid of challenges. The biggest one for Dave continues to be the absence of a specific program in atmospheric science, which makes it difficult to recruit strong graduate students.

In addition, particularly when they were new to the University of New Mexico, Dave and Jane felt that their colleagues might perceive them as a "voting bloc." They made a conscious effort to act entirely independently in their professional roles. They've been so successful, they say, that there are students in the department who don't realize they are married to each other.

Benefits of two careers in academia

Of course, being a dual career couple also comes with some advantages. Dave and Jane understand each other's work, which is very satisfying. They also both understand the demands of a career in academia. They have been able to coordinate their teaching schedules such that one of them is always available for their kids. They feel very fortunate to be working in a department that is supportive of families. This departmental flexibility has been particularly valuable to them, as one of their children is autistic, and therefore needs extra time and care.

Dave and Jane agree that universities are becoming much more aware of dual career issues, and hiring committees are more likely to be willing to deal with these situations than they were in the past. At the same time, they also suggest that aspiring academic dual career couples be prepared to be patient, be willing to compromise, and have some hard discussions with each other before beginning the job search process. For example, what will you do if one of you gets an offer for your dream job, but your spouse/partner can't find suitable employment anywhere in the area? Will you come to resent your spouse/partner if you compromise your own career ambitions? You need to have these discussions to clarify your priorities, both individually and as a couple. Then you'll be better prepared to face whatever situations arise during your search for academic positions.