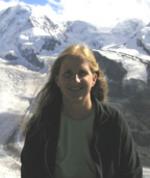 Hide
Donna Whitney. Photo courtesy of Donna Whitney and the University of Minnesota.
Most of the information on this page is from an interview conducted by Carol Ormand on March 9, 2006.

Donna Whitney and Marc Hirschmann are professors in the Department of Geology and Geophysics at the University of Minnesota, in Minneapolis, MN. Donna is a field-oriented metamorphic petrologist, while Marc is an experimental petrologist. When the department offered a tenure-track job to Marc, a second tenure-track offer, for Donna, was not far behind.

Jump down to:
First, individual success
To disclose or not to disclose
The challenges and rewards of dual academic careers
Advice for dual career couples

Both Marc and Donna earned their PhDs from the University of Washington. Their job search strategy was simply to apply, separately, for the jobs for which they were qualified. While they didn't know how it would all work out, they felt that they needed to each be successful before they tackled the problem of finding work in the same location. Donna and Marc knew that they were likely to be in geographically different places for a few years, but were willing to make that sacrifice in order to get their individual careers off the ground. Once they were established, they hoped, they would find a way to be together again.

So, over the next few years, Marc and Donna pursued their separate careers, moving a few times, keeping in touch via telephone, and earning a lot of frequent flyer miles. After they had been apart for more than three years, Donna had a tenure-track position at the University of North Carolina—Chapel Hill and Marc was a post-doc at Caltech. At this point, Marc moved to North Carolina to be with Donna, while maintaining his appointment at Caltech and spending long blocks of time there, including summers, when Donna could come with him. UNC -Chapel Hill created a part-time adjunct position for Marc. It wasn't an ideal situation, but it allowed Marc and Donna to spend about half of their time together, and still pursue their own careers, publishing papers, writing grant proposals, and applying for jobs.

Both Donna and Marc applied for a tenure-track opening in petrology at the University of Minnesota. Marc was offered the job, and they were both invited to visit the campus. During the visit, they were told that an offer for a second tenure-track position would be forthcoming. The original offer was for two 75% positions with the understanding that at some point in the future the chair would try to make those positions 100%. (Their positions became full-time after their first year at Minnesota.) Complicating their decision-making process, UNC—Chapel Hill, which had previously been unable to create another faculty line for Marc, offered him a full-time tenure-track position. After some stressful assessment of the advantages of each offer, they chose Minnesota.

Complicating their decision was the fact that they were about to have a baby. This added to the excitement of moving to a new place, starting a new job, and not yet having tenure. When Donna and Marc moved to Minneapolis, their daughter was 3 months old. Even so, everything worked out fine, thanks in large part to a family-friendly department, the excellent University Child Care Center, and a system that Marc and Donna worked out for balancing their time at home and the office.

To disclose or not to disclose

In the early years of their job searches, neither Donna nor Marc generally disclosed that their spouse was also on the market for a job in petrology. However, a few years later, the question of whether (or when) to mention their spouse had become irrelevant for Marc and Donna. Because of their individual successes, academic colleagues knew them and knew they were married to each other. In fact, many of their interviewers raised the subject, and not always in the most appropriate ways. As Marc and Donna point out, every candidate wants to be evaluated on his or her own merits, not on the basis of whether their spouse is also looking for a job.

The challenges and rewards of dual academic careers

The biggest challenge Donna and Marc face now, as a dual career couple, is coordinating parenting with travel. Both of them travel fairly often, to attend conferences, to give talks, and (in Donna's case) to do field work. Generally, that means the other person is a "single" parent for a while. Occasionally, they both go to the fall AGU meeting. At those times, they take their daughter with them, and trade off being at the conference and spending time in San Francisco with their daughter.

However, Marc and Donna feel that the challenges of dual academic careers are outweighed by the advantages. For one thing, they say, they never have to explain to each other the demands of an academic lifestyle. In addition, their schedules are relatively flexible, and they generally don't teach at the same times, so that when their daughter doesn't have school (for whatever reason), one of them can be with her. They were even able to arrange to go on sabbatical the same year, thanks in part to being in a large department.

Marc and Donna suggest that dual career couples concentrate on succeeding as individuals, first. If you're serious about your career, they say, you need to be prepared to make some short-term sacrifices. For example, they feel that the years they spent living in separate states, getting their careers launched, were an investment in their own future. They believe that they were so successful in their own search, ultimately, because both of them were strong candidates.

Nonetheless, Donna and Marc caution against assuming the worst before you begin your job search. Times have changed, even in the last decade; there's an increased awareness of dual career couples these days. It is possible to find two jobs in one location. Marc and Donna get frustrated when talented students consider giving up without really trying. Furthermore, not everybody's career develops at the same rate. At any given time one member of a couple may seem to be succeeding more than the other. Rather than making sacrifices if you are less successful, suggests Marc, allow yourself more time to succeed. Moreover, while Donna and Marc agree that two careers and one child are quite enough for them, they also feel that having two academic careers and a family is entirely manageable. The challenges are all solvable, they affirm -- and the solution is to work hard.