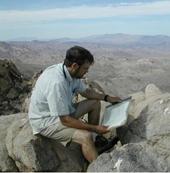 Hide
Calvin Miller. Photo courtesy of Calvin Miller and Vanderbilt University.
Most of the information on this page is from an interview conducted by Carol Ormand on February 27, 2006.

Calvin and Molly Miller are professors in the Department of Earth and Environmental Sciences at Vanderbilt University, in Nashville, TN. Vanderbilt is a small, private university, with just over 6400 undergraduate and 5000 graduate students. Molly and Calvin were hired to share a position at Vanderbilt. By hiring two people to share a single position, the (small) geology department greatly expanded the breadth and depth of expertise available to its students. Calvin is an igneous petrologist, interested in magmatic processes and continental tectonics; Molly is a sedimentologist and paleoecologist (?). After about ten years, both became full-time faculty members.

Both Molly and Calvin earned their PhDs from the UCLA (in 1977). During their final year in graduate school, they shared a lecturer position at nearby Pomona College. Then they both went on the job market. During their search, they were up front about aspiring to be a dual career couple. Where it looked as though they might be able to share a position, they each submitted a letter of application, but both asked about the possibility of sharing—specifying that they were open to either a single or a shared position. They did this even when one of them seemed to be a better fit for the advertised position. Both of them feel that their success in sharing the lecturer position at Pomona the previous year leant strength to their applications.

Calvin and Molly were interested in sharing a position for a couple of reasons: they both wanted to be seen as equals in the department, and they wanted to share equally in raising the children they would have soon after being hired. Besides seeing the opportunity to expand the expertise within the department, other members of the geology department were very supportive of these two young people looking to start a family. Even better, Vanderbilt already had a logistical solution to the question of how to hire two half-time people to share a position: the "full status, partial load" appointment. This type of appointment was designed to facilitate hiring in the medical school. However, it was equally acceptable to the university in this situation. So Molly and Calvin were each hired "independently," in separate positions. That meant, among other things, that each would come up for tenure independently.

The challenges of dual academic careers in geoscience

Calvin and Molly have always worked toward a common goal: making choices that were good for both of them, personally and professionally. Perhaps the biggest challenge they faced would be the same for anyone seeking dual careers in academia: finding a position or positions advantageous to both parties. Molly and Calvin feel very fortunate that Vanderbilt was so willing to accommodate their desire to split a position.

Time management is, of course, always a challenge in academia, and particularly for anyone who wants to devote a significant amount of time to family. However, Molly and Calvin point out that their shared position made that less of a challenge for them than it would have been if either or both had a full-time faculty position. And by the time they both made the switch to full-time faculty members, their children were 9 and 7, so they were a bit more independent.

One additional challenge for Calvin and Molly was doing field work. They never went to the field together, so one parent was always with the kids, but had to be a "single" parent for long periods of time. When the kids were in kindergarten and second grade, Molly was in Antarctica for two and a half months. At other times, Molly handled holiday travel with the kids while Calvin was in the desert southwest.

The benefits of dual academic careers in geoscience

There are also several benefits Molly and Calvin feel they've derived from their dual careers. First and foremost, says Molly, it's been fun! They've both enjoyed being able to work together and to raise a family together. It's been good for their children, too—they have a wonderful, egalitarian approach to their own lives. Even when they were quite young, the children didn't expect one parent or the other to be the primary caregiver. The children were very flexible, partly by necessity; they could adjust when either parent was in the field for a couple of months, knowing that the other parent was there for them. This also helped the kids forge close bonds to both of their parents.

There are some intangible professional benefits as well, Molly says, such as being better geologists because of their dual careers. Their specialties are so different, they point out, that because they talk to each other all the time, their perspectives are broader than they otherwise would have been.

Making time for work and family

Even while they were sharing a single academic position, Calvin and Molly had to juggle their responsibilities to find time for everything. They never both taught at the same time, so that one parent was always readily available for large and small emergencies with the kids. However, they also took advantage of some enriching, creative programs for children that gave the parents some "time off" from childcare. Molly and Calvin point out how lucky they were that Nashville offered such options at a time when daycare was frowned upon.

Calvin and Molly also turned some rather mundane chores into family events. For example, every Friday night they would all go the grocery store together. This not only created an opportunity for "family time," it was also efficient, because they didn't go grocery shopping at any other time. Similarly, while they almost never went out to eat, they made tasty, but simple, meals.

For couples starting dual careers, Molly and Calvin offer these words of advice, based on their experiences: