How to Teach with Structured Academic Controversy 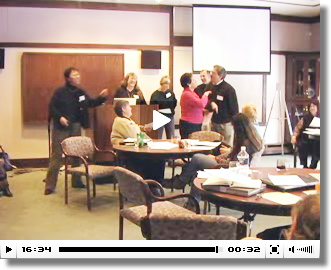 This is a scene from a structured academic controversy activity at the 2007 workshop on The Role of the Affective Domain in teaching Geoscience. Watch the video
Science educators, either actively or passively, are involved in formulating contemporary cultural views of what constitutes "science." The structured academic controversy technique provides an opportunity for examination of dominant and alternative perspectives of issues that are important inside and outside of the classroom. Moreover, this approach focuses on scientific, cultural, and social factors that contribute to the controversial issue.

The structured academic controversy should be introduced near the beginning of a course, such as in the syllabus. The instructional goal should be clearly stated, with the intent not to change anyone's mind or challenge personal beliefs, but the examination of interrelationships between science and society. The structured academic controversy should be held after the classroom community has had time to develop, so that students and instructor know each other well enough to feel comfortable during the exercise.

Depending on the selected format, each group of students is assigned one or two specific positions to research. The amount of outside research expected from the students to prepare for a perspective may also affect choice of format. In switch-format structured academic controversies, students first advocate one position as another team presents a counter position, then both teams switch roles (Johnson). In a double switch format, each group of students presents one view to another group with an opposing view, then switch the groups switch positions and discuss the issue with a new team.(D'Eon, Proctor, & Reeder). In a no-switch version (Khourey-Bowers, 2006) students research one position and are responsible for learning about the other points of view from the other teams.

Assessment of group work should include a variety of strategies, including individual and group assignments, and written and performance components, to encourage equitable contributions from group members. It is also reasonable to have group members evaluate their teammates' contributions. Make sure to establish the assessment plan when you assign the SAC so students know what your expectations are. However, SACs generally are intrinsically motivating. In my experience in using SACs at the college level for the last 6 years, I have had very few students try to "ride" on their peers' efforts. Most students put an extraordinary amount of work into their preparations, and the performance component, the Town Hall, typically demonstrates deep understanding among the students.

There are some challenges inherent in presenting controversies in the classroom. Here are a few additional resources for addressing specific issues that may arise: