Students are given a figure of a northern blot from a journal article, and are asked to interpret the results, demonstrating an understanding of both the northern blot technique and RNA processing in eukaryotic cells.

This problem is used in an undergraduate introductory biology course, but could also be used in upper level courses, such as genetics. The problem was designed for students to solve in-class in small groups, with faculty present to provide feedback and coach as needed (as described in the accompanying module. It was part of a handout that included other problems related to the process of transcription and RNA processing. The concept of eukaryotic RNA processing was covered in a brief, interactive lecture. Although students had been exposed to the technique of gel electrophoresis in previous problems, they had not been taught specifically about the northern blot technique.

A. Below is a representation of a northern blot (Nordstrom et al., 1979). Northern blots are used to detect the presence of specific mRNA molecules. To do a northern blot, RNA is loaded into the wells of a gel, and separated according to size by electrophoresis. The RNA is then transferred to a membrane filter in a process called blotting. Just like DNA, however, the RNA can't be visualized with our eyes. The filter is incubated with a specific probe that is radioactively labeled. The probe is a short piece of DNA that is complementary in sequence to the RNA you want to detect. The radioactive label on the probe allows you to visualize where on the filter the DNA probe bound to mRNA. Draw a picture of what was just described.

A piece of film (like they use for an X-ray) is laid on the membrane filter and then developed. The black bands correspond to where the probe bound to the RNA sequence. In other words, the bands show the position of mRNAs containing a complementary sequence to the probe. 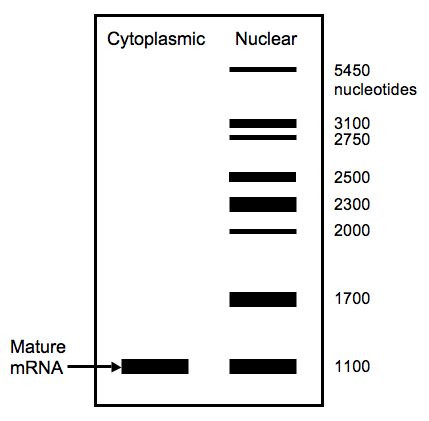 B. For this experiment, RNA was extracted from either the nuclei or the cytoplasm of hen oviduct cells. (What, you ask, is an oviduct? An oviduct is the organ of the female birds that puts the albumen, shell membranes, and the shell of the avian egg around the yolk.) The left lane shows mRNA from the cytoplasm and the right lane shows mRNA isolated from the nucleus. EXPLAIN these results based on what you know of eukaryotic transcription.

This type of problem exposes students to a new technique in a real context, and helps them gain practice with data interpretation skills. The questions require the students to operate at a high level of thinking (synthesis and analysis) to make the connection between RNA splicing occurring in the nucleus and the bands they observe on the gel. Students often don't intuitively connect the bands on the gel with the idea of exons and introns, even though they have just heard a mini-lecture on RNA processing, including splicing and alternative splicing. They often miss the significance of the nucleus and cytoplasm labels, and need coaching to recognize that the location hints at various processes, i.e. where in the cell mRNA is synthesized and processed versus where in the cell a mature mRNA may be located and translated. As students work this problem and discuss possible answers, misconceptions are frequently uncovered; for example, one common misconception is that there must be multiple genes coding for the protein and that is the reason for the multiple bands.

Note: in class we post the actual blot online. Because of copyright issues we include a representation of the blot in the student problem above.

We assess this activity in class as the students work, but it is not graded. Ungraded problems emphasize formative assessment instead of evaluation (Hanson, 2004). The focus shifts, at least somewhat, away from writing down the correct answer for a grade. Students are not punished for making mistakes and may be able to learn from them before the exam. Faculty check in with each student group to make sure they are understanding the problem, explicitly remind the students to think about what they've already learned (e.g. smaller nucleotide molecules migrate further on the gel), and may ask one group to draw their diagram of the northern blot technique on the board.