This activity has been accepted by a Panel Peer Review.

Reviewers rated the resources: They also singled out those resources they considered particularly exemplary, which are given a gold star rating.

Following the panel meetings, the conveners wrote summaries of the panel discussion for each resource; these were transmitted to the creator, along with anonymous versions of the reviews. Relatively few resources were accepted as is. In most cases, the majority of the resources were either designated as 1) Reject or 2) Accept with major revisions. Resources were most often rejected for their lack of completeness to be used in a classroom or they contained scientific inaccuracies.

What are Mathematical and Statistical Models

These types of models are obviously related, but there are also real differences between them. 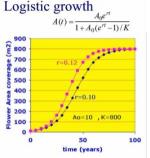 Mathematical Models:
grow out of equations that determine how a system changes from one state to the next (differential equations) and/or how one variable depends on the value or state of other variables (state equations) These can also be divided into either numerical models or analytical models.

Statistical Models:
include issues such as statistical characterization of numerical data, estimating the probabilistic future behavior of a system based on past behavior, extrapolation or interpolation of data based on some best-fit, error estimates of observations, or spectral analysis of data or model generated output.

As a way to clarify the above ideas, here is an example of the development of a simple mathematical model.


Why use mathematical and statistical models to teach introductory courses?

Mathematical and Statistical models can be used to help students obtain a better grasp on a variety of topics.

Learn more about the benefits of using mathematical and statistical models

How can these models be used effectively in class?

In addition to the general discussion about how to use models effectively, there are a number of considerations, both pedagogical and technical, that have to do with using mathematical and statistical models specifically.
More about How to Use Mathematical and Statistical Models

Building the Quantitative Skills of Students in Geoscience Courses: This special issue (v48 n4, edited by Macdonald, Srogi, and Stracher) of the Journal of Geoscience Education has several examples of how mathematics and statistics can be used in geoscience courses.