What / Where / People / Implications / Resources 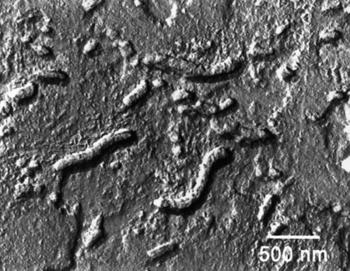 Hide
High resolution TEM image of potential nanofossils found in Mars meteorite ALH84001. This photo was taken from a replica of the real meteorite to prevent damage to the true specimen. Photo courtesy of the NASA ALH84001 Image Website.

Nanobacteria are the smallest cell-walled organisms on Earth, the existence of which is the center of great controversy. A nanobacterium is by definition one billionth of a meter in diameter (1/10 the size of bacteria), leaving some to question whether or not an organism of this size has enough room to house necessary cell components such as DNA, RNA, and plasmids.

Nanobes are small features found in organisms and rocks. It is debatable if nanobes are living entities. This more general term does not imply that the structures are or have been left behind by nano-sized bacteria.

Nanobes are thought to exist everywhere! Nanobe structures have been found within organisms as well as rocks. While their existence is relatively new knowledge, some speculate that nanobes may even outnumber bacteria by an order of magnitude!

Nanobes may also exist on other planets! Martian meteorites such as ALH84001 (more info) have been speculated to contain trace fossils of nanobacteria. The softball-sized igneous meteorite shows microscopic worm-like and "ovid" nanofossils.

Nanobacteria are thought to have been found in human blood and may be related to health issues such as the formation of kidney stones due to their biomineralizaton processes. This has been met with some resistance, as some argue that this biomineralization is caused by the nucleation of non-living biological molecules. (more info)

Major Players in the World of Nanobes:

Robert Folk, a sedimentary geologist from Austin, Texas, is known as the "father of nanobacteria" (although he prefers the spelling nannobacteria to conform with geological usage). Folk asserts that nanobacteria are key players in mineral formation and that their activities aid in the formation of geological strata (e.g. soil formation). Using acid etching and gentle gold shadowing techniques, he was the first to demonstrate the presence of 0.05-0.2 µm spherical structures in an assortment of geologic materials.

Dr. Philippa Uwins, a sedimentary geologist from the University of Queensland, Australia, discovered nanobes in Jurassic and Triassic sandstones from Australia in 1996. She and her research team are hesitant to term their nanobes "nanobacteria" until they are more certain of their evolutionary history and their general nature. She and her team have recently performed molecular analyses of these nanobes and found evidence for the presence of DNA as indicated by DAPI (Wikipedia definition), Acridine Orange (web definition), and Feulgen staining (web definition). In addition, they appear to be membrane-bound structures that are possibly surrounded by cytoplasm and nuclear area and are composed of C, N, and O, chemical constituents associated with living biota (Uwins, et al., 1998 (more info) ).

In 1996, a group of scientists led by David McKay of NASA's Johnson Space Center published a paper speculating the existence of nanobacterial trace fossils on Martian meteorite ALH84001. If these structures were indeed left behind by nanobacteria and if nanobacteria are true organisms, their findings would imply the existence of life on Mars at one point in the planet's history.

In 1998, Finnish scientists Olavi Kajander and Neva Ciftcioglu published a paper in the Proceedings of the U.S. National Academy of Science about the isolation, culturing, and partial characterization of ribosomal RNA (rRNA) for nanobacteria in human and cow blood and commercial blood serum. Their cultured nanobacteria were made up of apatite, a mineral composed of calcium and phosphate, which is found in teeth and bones. However, the reliability of their study results is questionable. The sequenced rRNA from their culture is almost identical to that of Phyllobacterium mysinacearum, a common contaminant of the reagents used in sequence analyses. In addition, other studies have shown that the nanobe culturing media has been found to spontaneously generate particles that resemble nanobe cells and "dwelling structures" when inorganic calcium and phosphate salts are combined with organic materials. 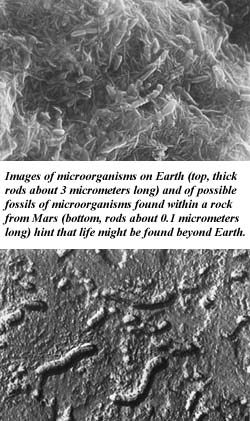 Hide
Mars meteorite ALH84001 was suspected to have nanofossils, evidence for life on Mars in the past. Photo courtesy of NASA.

Although the existence of nanobacteria would alter our perception of what qualities are essential for life, the following implications would be probable if nanobes are indeed alive:

Nanobe studies challenge our perception of life. Microbes have already expanded our understanding of the harsh conditions that can support life (see the Microbial Life Extremophiles collection). So, if nanobes do exist as living biota, they will broaden our perspective on the scale of life.
Back to Top

General Collection Resources such as news articles, web sites, and reference pages provide a comprehensive array of information about nanobes and nanobacteria.

For additional resources about nanobes and nanobacteria search the Microbial Life collection.