In addition to individual nutrients like N, P, potassium (K) and calcium, an overarching aspect of soil depletion and regeneration by human food producers is the important role played by soil organic matter (SOM) and the potential to either to deplete or sustain organic matter in soils (recall figure 5.1.1 and the fact that organic material is one of the key solid components of soil). In particular, concerns about soil organic matter (SOM) center on the large amounts of organic carbon in large molecules of SOM. This soil organic carbon (SOC) both feeds microbes in soil, allowing them to perform nutrient cycling functions and also contributes positively to soil properties. SOC is not a plant nutrient that comes from soil. In fact, it actually comes originally from the atmosphere in the form of plant remains that contain carbon fixed by plants (roots, leaves, manure, rotting wood etc.) and accompanies N, P, and other nutrients that were in the plants. SOC within soil organic matter plays so many important roles in soil function and soil fertility that it should be considered a "master variable" explaining soil productivity, along with soil pH, soil depth, and soil drainage. Among its other functions, SOM promotes soil storage of crop-available water, is a major food source for soil microbes that perform beneficial roles in soil, and fosters the availability of many nutrients by holding them in moderately available form or decomposing to release them in soils. In addition, by far the largest pool of nitrogen in soils is held in N atoms within many types and sizes of soil organic molecules, and also within the bodies of soil microbes.

In many food production systems where the soil is plowed (also called tilling or tillage), SOM is in fact depleted by oxidation (a "slow burn", like iron rusting) when soils are broken apart by plows, hoes, and other implements. Therefore, an important part of soil regeneration by human food production systems is not just replacing nutrients in a pure chemical form like fertilizers, but also maintaining overall soil function with soil organic matter. Therefore, in most parts of the world farmers have developed ways of reincorporating the roots and stems of plants (crop residues) as well as manure made by animals from the forage crops fed to them. These sources of plant carbon sustain SOM over the long term and feed microbes. These ways of sustaining the nutrients and organic matter of soils are depicted with a coupled human natural systems diagram below (Fig 5.2.2) as a type of feedback loop in which human systems respond to soil degradation by incorporating organic matter like residues, compost, and manure.

Building Soils for BetterCrops, pages 9-17 in Chapter 2: Organic Matter: What It Is and Why It's So Important. (Free e-book). This chapter and book will be used in modules 7 and 9. Download at:

The following exercise asks you to use graphical data based on real soils to make conclusions about the important role of SOM in water-holding capacity of soils. Along with the materials in module 4 on water and food production, and the systems approach to soil management in module 7, these concepts should help you to appreciate the role of SOM in fostering the environmentally sustainable production of food, as well as resilient systems (see module 10) that can deal with drought stress. 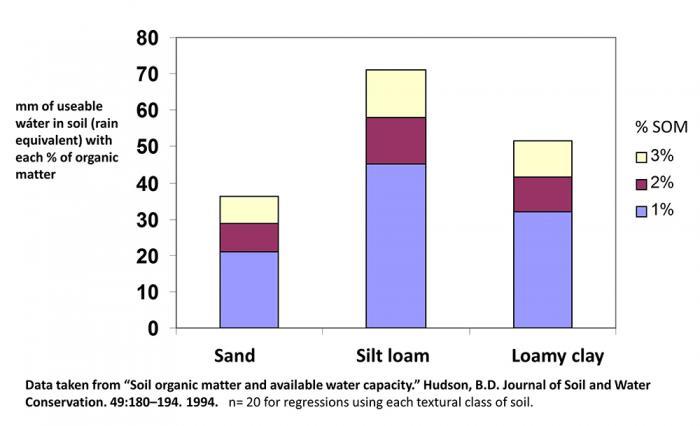 ×
Fig. 5.2.2. Storage of crop-available water associated with the texture of soil (sandiness, clayiness) and its level of organic matter (SOM)
Credit: Steven Vanek, based on data from Hudson, B.D. 1994. &quot;Soil organic matter and available water capacity. Journal of Soil and Water Conservation 49: 180-194.

Examine Fig. 5.2.2, which draws on about sixty soils analyzed in a publication that related the water-holding capacity of soils to their organic matter content. The graph summarizes that data as the height of three columns on a bar graph. The height represents the amount of water stored in each soil, imagined as a depth of water in mm covering the soil at its surface (this is also how irrigation managers imagine applying water to soils, as the mm of rainfall they have replaced with irrigation). Each column represents a type of soil, from a coarse-textured sand on the left to a "heavy" or clayey soil on the right. The stacked colors on the graph represent the way that organic matter is able to improve the water-holding capacity of soils. Answer the following questions (you can click on the box after answering to find out the answer).

In a dry climate, what type of soil would store the most water between rainfall events, regardless of soil organic matter level (a sand, a silt loam, or a clay)?

How many mm of water storage approximately do you gain by increasing the soil organic matter level of a clayey soil from 1% to 3%?

3. You talk to the manager of an experiment that is comparing a crop of maize grown in a field with a low-organic matter sand (1% SOM) and a high-organic matter silt loam (3% SOM), which miraculously are on either side of a farm lane. As you walk along next to the experiment, she tells you incredulously, "It's amazing, after this one-month drought, the silt loam maize is doing so well that it looks like it has had an extra imaginary rainstorm. It looks like about ______ inches of rain fell there that didn't fall on the maize in the sandy soil!"

If you had to fill in her blank you would guess: _______ inches (hint: remember to convert mm to inches, divide by about 25)