Skip to Main ContentSkip to Navigation
Your Account
InTeGrate Modules and Courses >Future of Food > Student Materials > Module 5: Soils as a Key Resource for Food Systems > Module 5.2: Soil Nitrogen and Phosphorus: Human Management of Key Nutrients > The Phosphorus Cycle and Human Management of Soils
InTeGrate's Earth-focused Modules and Courses for the Undergraduate Classroom

The Phosphorus Cycle and Human Management of Soils

Basics of The Phosphorus Cycle in Food Production

In an analogous way to the nitrogen (N) cycle on the previous page, we will present the basics of the phosphorus (P) cycle related to food production (refer to figure 5.2.4 below in this section) You'll note that the P cycle is a good deal simpler than the N cycle. For example, there is no gaseous form of P as there is for N, so the atmosphere does not participate in the P cycle. Also, leaching of soluble P is not a major issue as it is for soluble soil N. To begin the description of the P cycle, the large reserve of "primary" P that is accessed by plants and fertilizer production for agriculture is not the atmosphere (as it is for N), but rather so-called phosphate rocks (or rock phosphate) in the crust of the earth, which are mined like other minerals. These rocks are ground up and treated in fertilizer factories to make the phosphate (PO4-) in them water-soluble so that phosphate can be directly taken up by plants from the small pool of soluble phosphorus in soils. In addition to this industrial process that supplies P to plant roots, there are small amounts of soluble P that are continually released by weathering (see Module 5.1) of grains of rock phosphate that form a small part of most soils. These plant-available forms of P from fertilizers and weathering are taken up by plants and pass into the food system when crops are harvested for food products or are fed to livestock. Just as for N (figure 5.2.3), crop residues and manures with organic P are recycled to the soil and are an essential way of replenishing soil organic P supplies. Also, decomposition of soil organic P that liberates soluble P, and uptake of P into the bodies of microbes, link the organic P pool in soil organic matter (SOM) with the small amount of soluble P in soils. 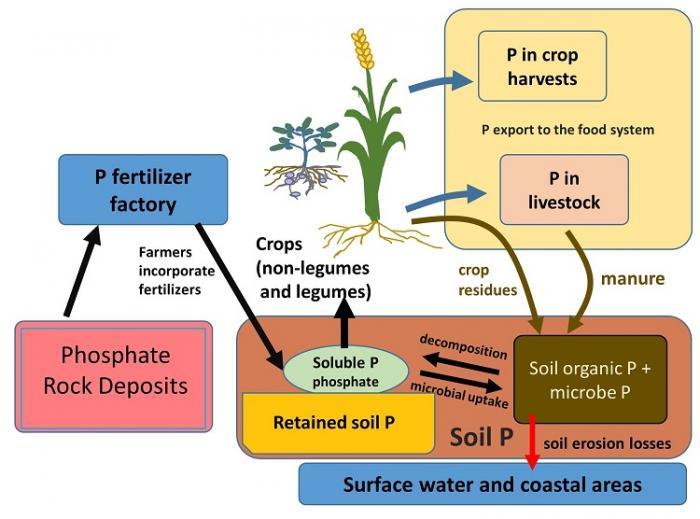 Fig. 5.2.4. Diagram of phosphorus (P) cycling relevant to food systems, drawn in an analogous way to the N cycle in figure 5.2.3. This diagram can be thought of as four main areas: (1) Phosphate rock deposits that are used to produce phosphorus fertilizers (along with "native" grains of rock phosphate in soils, see below); (2) Soil P, which is divided into a larger organic P pool and a relatively minuscule pool of soluble P, and also contains relatively unavailable forms called "retained P" held on soil minerals like clays; (3) Phosphorus in plants, which includes all tissues and the energetic machinery of plants; (4) Crop and livestock P exports to the food system. Note that there are multiple flows into and out of soils of P, and also fractions and internal cycling within soils from one form of P to another. In addition to the rock phosphates that are mined and turned into fertilizer, many soils also have their own mineral P supplies in the form of small rock grains that contain rock phosphate. These amounts are small but can be sufficient in wild ecosystems (Fig. 5.2.1) under normal weathering processes that release nutrients in most soils (see module 5.1 for a description of weathering). The different fractions of soil P represented by the shapes in the soil box are not necessarily in proportion to their relative size; also the relative amounts in different pools varies considerably among different soils.

One difference between the cycling of P vs. N in soils is the fact that most soils have ways of chemically capturing and holding soluble P in forms that can become very unavailable to plants. The clay mineral fraction of soils is especially active in retaining P, especially so for the clays that occur in tropical soils (you may be familiar with rusty or yellow-colored clays, made from iron oxides, in warmer areas of the United States and the world). This is called soil retention or fixation of P. In a soil that retains P strongly, less than five percent of the P in applied fertilizer, which enters in a soluble form very suited for plant uptake, is ever available for crops. The rest is quickly locked away by reactions with soil clay minerals. Soil scientists call this process P fixation or P retention, and a global map of estimated P retention has been made (Figure 5.2.5) that summarizes how phosphorus can become limiting to food production, which is a serious problem in many tropical soils. One comparison that may be helpful in remembering the way that soil locks away phosphorus is to contrast it to the behavior of soil N. While soil N is "flighty" or "leaky" with multiple forms and loss pathways, soil P tends to be the "clingy" opposite of soil N -- the issue is not that it is held too loosely in soils but rather that it is held too tightly.

To address the challenge of retained P, farmers may resort to continually supplying fertilizers and manures to crops, often in quantities that greatly exceed crop demand. Nevertheless, additions of organic matter also tend to make retained or fixed P more available, combined with the use of crop species that can better take up fixed forms of P, so that P is moved from the retained, unavailable fraction of P to organic forms in crop and microbial biomass that are eventually recycled into available soluble forms. Certain plant-symbiotic soil microbes, especially mycorrhizal fungi, are particularly efficient at helping plants to access these less soluble forms of soil P. In addition to these soil management measures, first farmers, and now formal plant breeders have developed crop varieties that are more efficient in taking up some of retained P that is locked away in soil. 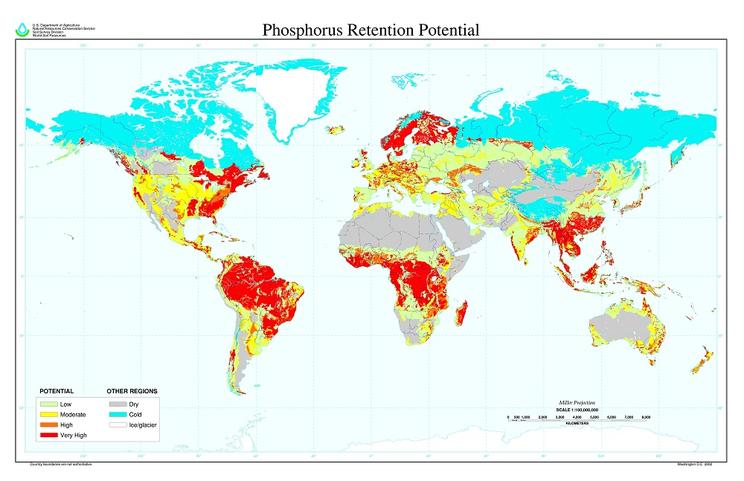 Fig. 5.2.5. Global map of soil P retention potential. Old and very old soils in warm-climate areas, as well as leached soils under cold-climate conifer vegetation, tend to exhibit the highest rates of soil P retention. These soils can make applied P fertilizers very unavailable to crops. In response, farmers can apply lime to raise the pH of these often acid soils, or continually re-supply P via fertilizers (which can be very inefficient if most of this fertilizer is quickly made unavailable); or add P in organic forms that become solubilized by decomposition and can directly feed plant roots before P is fixed. In practice, all of these approaches are used.

As can be seen in Fig. 5.2.4, erosion of particles of soil that contain organic and retained P is the major pathway of phosphorus loss from soils (red arrow in Fig. 5.2.4), in contrast to P export for useful purposes in crop- and livestock-based foods. Along with maintaining the availability of soil P with regard to P retention, protecting soils against erosion is an excellent way to protect the ability of soils to supply P for food production. This main message will be taken up in the summative assessment for this module, and again in Module 7.

One of the important factors in deciding how much P must be added to soils to replenish them is the amount of P that is exported by typical crops and food products. This exercise will guide you in calculating the amounts of P that leave farm fields on a per area basis, and also at the level of a "phosphorus use footprint" for typical products, analogous to a water footprint in module 4. Consider the table below which reports the use of P to produce unit quantities of a few representative foods. The first column (A) reports very approximately how much a single hectare of soil (100 by 100 m area, about 2.5 acres) will support. The second column (B) is the content or concentration of phosphorus in the food, which means that multiplying A x B gives the kg P exported from the soil by the crop or animal product, which is shown in C. Columns D and E take a slightly different approach: in D the amount of the product eaten by an average U.S. person is reported. In column E, that per-person amount is turned into a per-person consumption of phosphorus in grams (per year)

aAbout the equivalent weight of half a beef cow/steer
bVery roughly a single production cycle (about 12 months) in liters for a single, lactating cow of a high-production variety

Of the food crops carrot or wheat, which crop removes more phosphorus from the soil on a per-Ha or per-acre basis?

Of the animal products, which product removes more phosphorus from the soil on an average annual basis per person?

Hide
ANSWER: Beef with 350g P per person per year. (of course for people who do not eat beef the number is zero, but this figure is an average across beef eaters and non-beef eaters)

As is sometimes the case for complex systems, this simple table hides some complexity and "hidden flows" for phosphorus associated with meat and milk production. The numbers used here reflect the milk or beef that leaves an average farm and goes to consumers, called a farm-gate flow because it measures what passes out of a farm to consumers. Unlike the crops, where the only phosphorus used comes from the soil (which can include fertilizers applied to the soil), animal products reflect both the P in the beef or milk that left the farm but also additional P that may have come from other farms in the form of feed crops. This additional P was fed to the animals but not used in the growth of the animal or milk production. Where does that P end up? What is done with that P? (hint: think smelly!)

Hide
ANSWER: mostly in manure, which is spread back onto fields, and can, therefore, build up in agricultural soils.