Soil Nutrients: The Sustainability Issues of Shortage and Surplus

Both N and P are distinctive in possessing extremes of surplus and shortages across the variety of food production systems around the globe. For poorer small-scale farmers, who number more than two billion globally, the means to effectively replenish the nutrients exported by crops, or detain the nutrients removed by erosion on sloping land can be beyond the reach of their financial means or labor power, or simply not sufficiently part of their knowledge systems. Deficits of nitrogen and phosphorus in soils ensue, complicated by soils that may have a high degree of P retention, and low organic matter levels that decrease the overall soil quality by retaining less water and crusting easily, aspects that will be emphasized in the following modules. Applying the "bank account" analogy of soil nutrients introduced at the beginning of this module, after constant withdrawals the "soil bank account" begins to run such a low balance that overall functioning of soil productivity, and with it the livelihood of a smallholder household, are impaired. This can lead to a downward spiral of soil productivity (see the assigned reading for this module) that links issues of environmental, social, and economic sustainability. 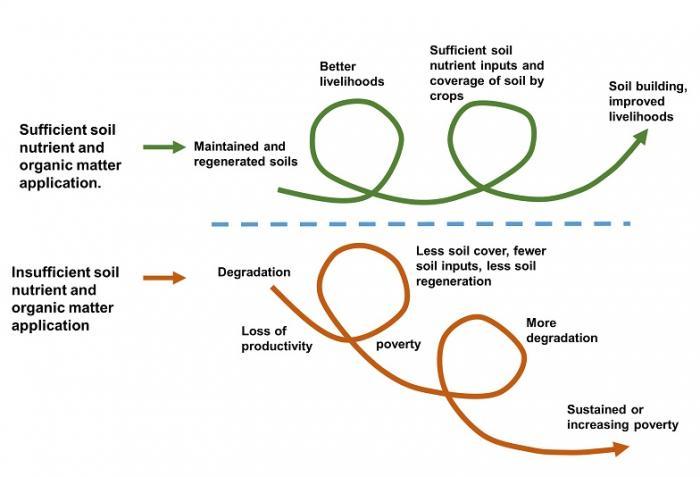 Fig. 5.2.5. The concept of the downward or vicious cycle of soil nutrients and organic matter as a driver of soil productivity (brown spiral), and a "virtuous cycle" alternative (green spiral) where the maintenance of soil nutrients and soil quality broadly with organic matter, allows for better livelihoods and reinvestment in soils with nutrients. We will revisit this diagram in module 10 when talking about sustainable food systems.

Another feature of human-natural interactions for soil nutrients is the aspect of surplus exhibited by a "leaky" or "flighty" nutrient like nitrogen. This has been compounded by the development of large-scale human capacity to add surplus nutrients to farm fields for food production. It's important to realize that prior to N fertilizers, bacterial nodules on the roots of legume crops (see Fig. 5.2.3 and the coverage of legumes in module 6) were the major way that N entered soils from the atmosphere, including the soils used for food production. Farmers before about 1900 relied exclusively on legume crops, as well as animal (and human!) manures derived from legumes and other crops as the principal way of regenerating the nitrogen in soil organic matter. These materials incorporated to soils decompose and release N that was used by crops. Since 1913, when N fertilizer production from the atmosphere was developed as a factory process, humanity has deployed greater and greater amounts of fossil fuel energy to fix greater and greater amounts of atmospheric N2 into soluble forms to feed crops. A startling fact is that humans now fix more atmospheric nitrogen than do legumes. This has buoyed the overall productivity of human food systems beyond what might have occurred without such fertilizers and is credited by many with avoiding widespread hunger (or dramatically expanding the population carrying capacity of earth's human-natural systems, depending slightly on the perspective taken).

As has been noted in module 4, there have been unforeseen consequences of this trend towards greater fertilizer use that have become more evident in recent years. First, the share of CO2 greenhouse gas emissions from fertilizer production has become a primary contributor of the overall impact of agriculture on global warming. Another is that fertilizers, in combination with a profit-minded vision of soil fertility that did not incorporate a view of the whole human-environment system, bred a highly "chemical" vision of soils that neglected the important role of soil organic matter and the physical and biological qualities of soil. This resulted in unforeseen negative impacts as farmers over-applied nutrients at a local scale to guarantee the highest yields possible, thereby polluting watersheds, and allowing farmers to lose sight of the important role of soil organic matter outlined in this module. In a more subtle way, there has been an increasing focus in plant breeding and globalized seed systems on varieties that respond well to soluble fertilizers, which many argue have favored the expansion of more industrial modes of food production to the financial detriment of smaller and more sustainable food producers. If you recall the narration of agricultural history in module 2, you will recognize that this is an example of niche construction, in which a modern, chemical-intensive niche has been created for specially bred modern varieties along with fertilizers and other chemical inputs. Nevertheless, many of these problems associated with an exclusive reliance on nitrogen fertilizers and chemical fertilizers are now recognized by researchers and policymakers. Current approaches to soil the world over have placed renewed emphasis on the importance of organic matter and a more economical use of nitrogen fertilizers.

In the summative evaluation for this module, you will explore these "surplus and shortage" issues of sustainability for Nitrogen and Phosphorus, which are emblematic of present-day and future sustainability challenges in the area of nutrients cycling.