Skip to Main ContentSkip to Navigation
Your Account
InTeGrate Modules and Courses >Future of Food > Student Materials > Module 5: Soils as a Key Resource for Food Systems > Module 5.2: Soil Nitrogen and Phosphorus: Human Management of Key Nutrients > The Nitrogen Cycle and Human Management of Soils
InTeGrate's Earth-focused Modules and Courses for the Undergraduate Classroom

The Nitrogen Cycle and Human Management of Soils

Nitrogen (N) is one of the most important nutrients for plant growth and crop production, along with phosphorus (P) considered on the next page. Nitrogen is important because it is used by plants for to create proteins, which include the enzymes and building blocks of their photosynthetic "machinery". In fact, nitrogen in some ways underlies the green color of plants and vegetated areas on earth's surface, because of the green, N-containing chlorophyll proteins (enzymes) used in photosynthesis (see module 4), which along with the other photosynthetic enzymes is one of the major uses of nitrogen within plants. These plant proteins become animals protein when plants are fed to livestock, or when we eat plants. The ubiquitous nature of nitrogen for the protein needs of earth's biosphere explains why N is such an important nutrient for plant growth. Nitrogen is, therefore, a key element in the entire food system and interacts very strongly with human management. One indication of nitrogen's importance to the food system is that humans currently expend more energy on creating N fertilizers for food production by taking N2 out of the atmosphere in fertilizer factories (Fig. 5.2.3) than is spent on any other nutrient.

This module focuses on the subject of nutrient cycling, and below in figure 5.2.3, we present a basic diagram of the nitrogen cycle. Your initial impression of the diagram may be its relative complexity compared to the water cycle, for instance. This is true: the N cycle is complex, starting with the fact that it involves gas, solid, and liquid forms: gaseous N in the atmosphere, solid forms of N in soils and plants, and N dissolved in water in the soil and in earth's waterways (you may remember the problem of N pollution in waterways from module 4). To simplify this and take away the key concepts which should be your goal in this module (entire courses can be taught on the N cycle), we will present the basic pathway of N from the atmosphere into plants, soils, and water, which will complement the caption for the N cycling diagram below. Please refer to Figure 5.2.3 throughout this description. First, N exists in an enormous reserve as 78% of earth's atmosphere (top left of Fig. 5.2.3). Creating usable forms of nitrogen requires that this N2 gas is "fixed" in the same way that plants fix carbon into their carbonaceous stems and leaves. Legume plants like beans, peas, and alfalfa host bacteria in their roots in nodules that are able to fix N2gas (more on legumes as an important crop family in module 6). Nitrogen then moves directly into legume plants' tissues as proteins. In parallel to this biological fixation of N, humans have designed industrial methods to fix N in factories, using energy from petroleum and natural gas, and creating soluble nitrogen chemicals that are applied to soil, where they dissolve in soil water to become part of the pool of soil soluble N that is available to plants. This pool of soluble N (light green oval within the soil N pool below) is also called inorganic N to contrast it from organic N in proteins, crop residues, and soil organic matter. Inorganic N taken up by plants, plus the N fixed by legumes, is then used to grow crops and eventually produce crop- and livestock- based food products. Meanwhile, organic "waste" products from growing crops like straw, cornstalks, and roots, plus animal manures which are undigested plants, are not "waste" at all but are a hugely important organic source of N and other nutrients that is recycled to soil (brown arrows in Fig. 5.2.3). These organic soil inputs applied by farmers help to maintain soil organic matter (SOM; see previous pages and the assigned reading on soil organic matter) including the largest pool of soil N within SOM and soil microbes. Soil organic matter can be decomposed by microbes, liberating additional amounts of N to the inorganic N pool. ?bes also can take up soil inorganic N, reversing the effects of SOM decomposition. 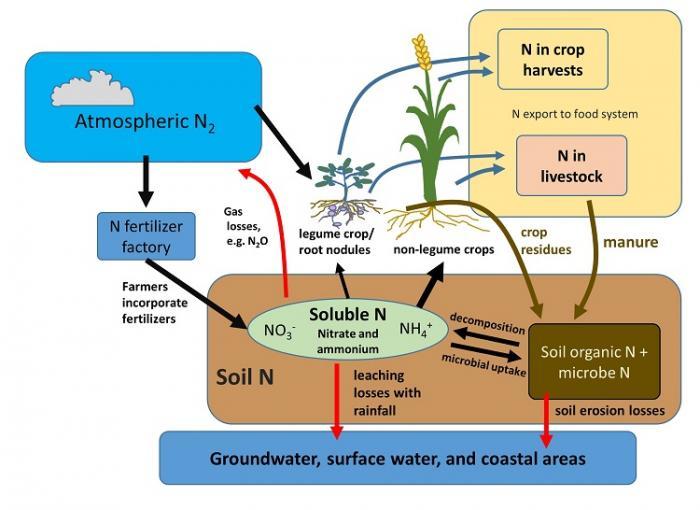 Figure 5.2.3 Main features of nitrogen (N) cycling in food production systems. The diagram shows the multiple forms of N in soils and food production. Despite its complexity the diagram can be more simply considered in four parts: (1) a large atmospheric pool of N at upper left, which is used to make chemical fertilizer in factories and also by legumes to directly absorb N from the air for their own protein needs; (2) A soil pool which includes a predominant pool of organic N in large organic molecules (Soil Organic Matter or SOM) and microbes, as well as a fluctuating pool of inorganic N that is soluble in water (nitrate and ammonium ions); (3) The crops at the center of the diagram that are a main focus of human food production, and draw nitrogen from the pool of inorganic N in soil as well as from the atmosphere (in the case of legumes) and (4) Crop and livestock nitrogen exports from soil of nitrogen that then move through the food system to consumers. The very important return of crop residues and manure N to the soil N pool should also be noted (brown arrows). In addition, N can be lost from the soil in ways that are not productive (red arrows): as gases back to the atmosphere, including N2O, a potent greenhouse gas; as leaching losses of nitrate in rainfall into waterways, and as erosion of soil particles that include soil organic N that move out of agricultural fields, eventually becoming sediments in waterways and estuaries.

So far the N cycle may appear a relatively neat and ingenious system (albeit quite complex!). However, it is important to highlight the ways that it can become problematic under human management, indicated by the red "loss" arrows in Fig. 5.2.3. First, when the soluble N pool in soil is large, for example after fertilizer or manure is applied, and abundant water moves through the soil, like during a rain event, excessive soil N can move into waterways causing pollution and coastal dead zones (this is covered in some detail in module four, and again in this module's summative assessment). This process is called leaching of soil soluble N. Second, when erosion occurs, soils can also lose large amounts of their N "bank account" through erosion, because solid organic matter particles are rapidly eroded from soils in hilly areas when soil is not protected by plant cover or stabilized by plant roots. Lastly, soils can lose nitrogen back to the atmosphere through the processes of gaseous loss, where dissolved nitrogen becomes N-containing gases that diffuse back to the atmosphere. If you have ever caught a whiff of ammonia from a bottle of ammonia cleaning solution (dissolved ammonium that becomes ammonia gas) you know how N can move from a solution like that in a wet soil into the air. The most serious of these gas loss pathways is nitrous oxide (N2O) which is of concern because it is a potent greenhouse gas that contributes to global warming.

All of these loss pathways create the impetus for farmers and the food systems that support them, to manage nitrogen in an efficient and non-polluting way. The idea that highly productive farming systems with annual crops, manures, and fertilizers can completely eliminate N losses is actually quite challenging. This is because the N cycle has so many participants (humans, plants, microbes, livestock) interacting in complex ways (note: a complex system!), and because nitrogen is inherently "flighty" and "leaky", never staying put and always in transformation, with some forms so easily lost from soils to rivers, lakes, and the atmosphere. Nevertheless, there is much room for improvement that can also serve to save money and energy for food producers, and avoid the pollution costs to downstream ecosystems and food producers (for example, fishing communities affected by dead zones, see module 4). Two of these are (1) increasing the efficiency of timing and amounts of N fertilizer and manures to better match only what is needed by crops and (2) including crops and other plant components on farms that help to recycle soluble N from deeper in the soil and in downslope areas before it reaches waterways. Both of these strategies are addressed in the following modules on crops and systems approaches to soil management (modules 6 and 7). In addition, if N is not replenished in soils after it is exported as food products or suffers these losses, crops can face N insufficiency, which is a major issue for poorer farmers around the world. The summative assessment for this module focuses on these twin issues of nutrient deficiency and excess.