What are the Next Generation Science Standards?

Jump down to: What do the Standards Do? | What do they look like? | References

×
The logo for the Next Generation Science Standards.

Provenance: NGSS is a registered trademark of Achieve. Neither Achieve nor the lead states and partners that developed the Next Generation Science Standards was involved in the production of, and does not endorse, this product.
Reuse: Copyright and use guidelines available here: http://www.nextgenscience.org/trademark-and-copyright-guidelines Seeking permission to use as of 10/8/2014.
In the United States, each state is in charge of setting its own standards for what students are expected to learn and be able to do at each grade level, and for assessing students' level of achievement against those standards. Standards typically cover content in English/language arts, math, and science. The Next Generation Science Standards (NGSS) were released in 2011 and were designed to reflect advances in education research as well as new material generated since the previous standards were established. As of July, 2014, twelve states and the District of Columbia had adopted the NGSS and begun implementing them in their school systems.

See more on the creation of the Standards

In 2009, the National Research Council (NRC) initiated the process of developing a new set of national science standards, which could be adopted by states if they chose to do so. They began by assembling a group of content experts who worked together to produce a framework of science and engineering practices, cross-cutting concepts, and disciplinary core ideas that went out for public review before its final release in 2011. Based on the framework, a team from twenty-six lead states developed the Next Generation Science Standards (NGSS), which consist of a coherent set of performance expectations that combine disciplinary core ideas with science and engineering practices and are tied to other disciplines through cross-cutting concepts.

What Do the Standards Do?

The Earth and space science standards in the NGSS emphasize Earth's place in the universe, Earth's systems, and Earth and human activity. There is far more emphasis on students being able to use Earth science data to do things like make predictions, interpret the distribution of fossils and rocks, assess hazards, and develop models than was present in previous standards. This new emphasis marks a large shift away from previous standards that emphasized classification, and encourages the development of expert thinking skills within the context of sustainability and how humans interact with Earth and Earth processes.

In addition, the core ideas and skills in the NGSS differ significantly from the content covered in a traditional introductory physical geology course. If future teachers make up a large percentage of the students enrolled in your introductory courses, you might consider developing your syllabus to address the new expectations.

Here's an example of the performance expectations for 4th-grade students in the disciplinary core idea of Earth and Human Activity: 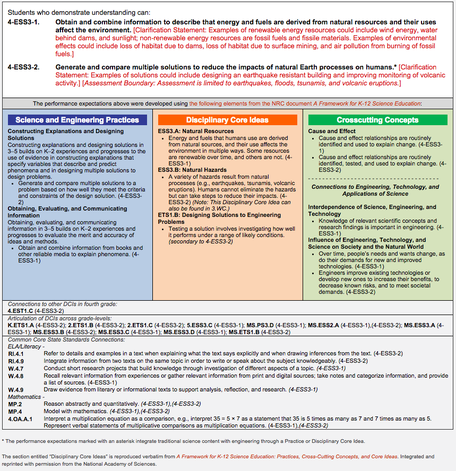 At first glance, this looks very complicated, but the structure of the graphic is meant to reflect the ideas behind the standards:

InTeGrate and the NGSS

InTeGrate-developed courses and modules, by design, offer an active learning and interdisciplinary approach to teaching and most activities have been aligned with the NGSS. Learn more about how they are aligned and search the collection to find materials that meet your needs. You can also explore strategies for addressing performance expectations

Implementing the Next Generation Science Standards »

This collaboration between NAGT and AGI focuses on providing support for teachers and faculty to implement the NGSS well. The collaboration features a series of webinars on important NGSS topics as well as other resources.