Purpose of the IAI:

The IAI was developed by the InTeGrate external evaluation team to elicit three different kinds of information from students who were participating in InTeGrate-impacted instruction:

Audience for this document:

Current version of the instrument:

The links below access screen shots of the version of the IAI that has been in use since January 2014. Students see an interactive version of these same views. (Warning, these files can be slow to load.) Enactments between Fall 2012 and Fall 2013 used a slightly different version; see Revision History below.

How the IAI is used:

The IAI has been used in the following contexts:

Development of the IAI:

The items that became the IAI were developed over the Spring and Summer of 2012, through the following processes:

Coding of the Open Response Question:

The IAI includes one open response question, administered post-instruction: "As you think about your future, can you envision using what you have learned in this course to help society overcome problems of environmental degradation, natural resources limitations, or other environmental issues? If no, why not? If yes, how?" A coding scheme for student responses was developed through a grounded theory inductive approach, in which the researcher examines the responses for patterns and trends that emerge from the data and then categorizes these according to codes or concept indicators (Chi, 1997; Feig, 2011). Answers from those who had responded "yes" and "no" to the initial question were coded separately. As is typical in such work, the coding scheme passed through multiple iterations involving two researchers comparing, reconciling, and revising. 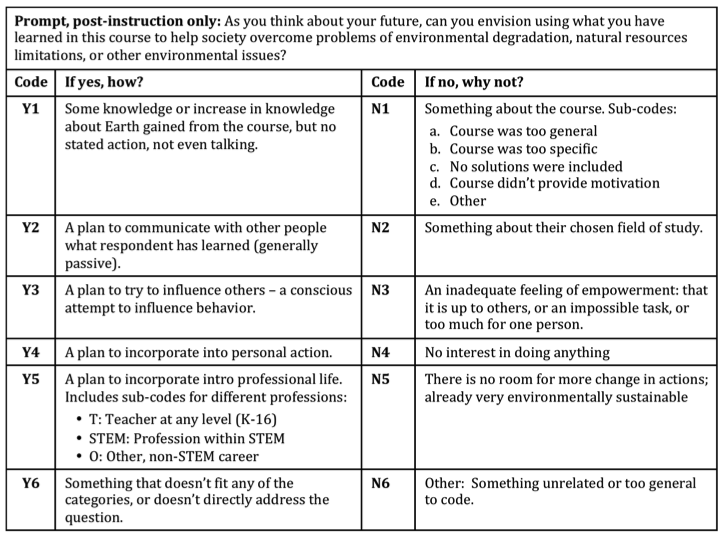 Revision History of the IAI:

There have been two operational versions of the IAI. The old version (referred to as the "2012" or "2012-2013" version) was used in InTeGrate enactments between fall 2012 and fall 2013. The new version was introduced for InTeGrate enactments that began with the spring semester of 2014. The motivations for the changes were to simplify some unnecessarily complex wording, to better accommodate the lack of skip-coding in the online version, to allow more nuanced answers to the sustainable behaviors question, and to incorporate two stand-alone items into a cluster of similar items.

Here are the items as asked in the old version, as well as a summary of what was changed between the old and new versions:

For the project-wide evaluation of the entirety of InTeGrate, we have combined data from the old and new versions of the survey for some findings, as well as reporting other findings from the new version alone. The link below explains how the combining was done. The combined data should not be used to make longitudinal comparisons between the earlier and later years of the project, because of the change in instrument wording.

The IAI was developed as a project-wide evaluation tool, and thus the evaluation team looks only at project-wide data and subsamples of project-level interest (such as under-represented minorities or pre-service teachers). However, some teams within the project are concerned with smaller specific subpopulations, such as all students in the pilot testing of a particular instructional module. To enable such teams to easily analyze their own IAI data, the IAI Analysis Toolkit has been developed. The Toolkit is an Excel spreadsheet pre-populated with data from a national sample of InTeGrate-using students. Teams can cut and paste their own IAI data into the Toolkit, and it automatically generates a suite of graphs and tables comparing the teams' sample with the national sample.

Limitations: The Toolkit works only with the new version of the IAI (enactments during or after spring 2014), and works for samples of up to 200 students. You need to get data for your sample of interest from the SERC staff.