The IDOR project includes two different types of seismology experiments. Ray Russo and his group from the University of Florida used broadband seismometers in a passive source approach in Eastern Oregon and Western Idaho. As part of the EarthScope Flexible Array project, they buried 85 three-component seismometers about 15 to 35 kilometers apart in a grid formation. They left the seismometers in the ground for two years to record earthquakes from around the world. By analyzing the data recorded by these seismometers, researchers can begin to understand the deep structure of the mantle below this area.

Broadband seismometers are very accurate seismometers that tell you the ground motion—both vertical and two horizontal directions, depending on where the earthquake originates. So they're using strong distant earthquakes such as occur in New Zealand or China. As those waves come through the Earth, they tell you something about the subsurface that they're traveling under, in this case a region of Idaho and Oregon. 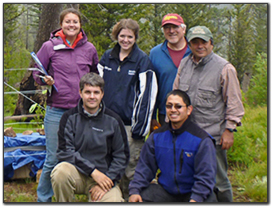 In the summer of 2013, teams supervised by PI Ray Russo, many of them students, returned to Eastern Oregon and Idaho to remove the grid of seismometers that had been installed two years earlier. EarthScope Chronicles followed three individuals involved in this effort as they dug out and disassembled one of these seismic stations from a remote site near Challis, Idaho. On hand that day were students Megan Torpey and Christian Stanciu, and Research Scientist Victor Mocanu.

In an earlier active seismic study, PI John Hole and his group from Virginia Tech used an active source method to study the Earth's crust and the deep crust, including their structure in this area and how they have evolved through time. Instead of a grid spacing, his team placed more than 2,000 seismometers about 200 meters apart from each other along a single 450-kilometer line or transect. The seismometers were installed for a short period of days rather than years. This research team created its own earthquakes by setting off explosions to provide a source for generating seismic waves. Because they know the exact time of each explosion, the researchers can determine how long it took for the seismic waves to travel to the different sites along that same line. This approach gave them a detailed look at the upper 50 to 100 kilometers of the Earth's surface.

For studying the subsurface structure of the Earth in this area, this active source approach provides a more detailed, higher resolution look than Ray Russo's passive source study, which can look deeper but not as clearly. In both of these seismic methods, the seismic waves travel much faster through some materials such as mantle rocks and more slowly through crustal rocks like sedimentary rocks.