The continental crust bears the scars of over 4 billion years of Earth history, and North America provides one of the most complete records of continental growth, modification, and breakup. EarthScope's vision is to use North America as a natural laboratory to gain fundamental insight into how Earth operates. The complexity of geologic processes requires contributions from investigators across the Earth sciences, working both as individuals and as members of multidisciplinary collaborative teams. The goal is to enable and encourage scientists to study Earth in creative new ways, allow innovative ideas to thrive, and ultimately provide new insights into the past, present, and future of the planet we live on. (Excerpted from EarthScope Big Ideas)

EarthScope scientists use state-of-the-art instruments and methods to collect data from seismic waves, crustal movements, Earth's magnetic field, rock and soil samples, and images obtained from aircraft and satellites. This research helps us better explain geological phenomena, protect ourselves against natural hazards, and locate necessary resources. By integrating information derived from its three multi-disciplinary observatories (US Array, PBO, and SAFOD), EarthScope aims to understand and describe how geological forces shaped North America's landscape and to contribute to the public's understanding of our dynamic Earth.

Probing Beneath the Surface 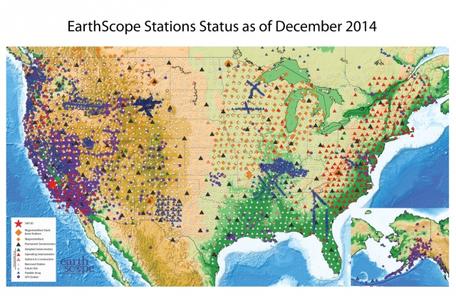 Provenance: Image source: EarthScope (http://www.earthscope.org/science/observatories/usarray/)
Reuse: This item is offered under a Creative Commons Attribution-NonCommercial-ShareAlike license http://creativecommons.org/licenses/by-nc-sa/3.0/ You may reuse this item for non-commercial purposes as long as you provide attribution and offer any derivative works under a similar license.
Continent interiors contain the oldest rocks and records of the early formation and evolution of our planet. Continents are crisscrossed by faults, new and old, that developed to relieve the stress and strain of constant, though geologically slow, plate tectonic motion. Some of these faults can be mapped at the surface, but many have been either covered over by sediments deposited after they formed or are very deep and never reached Earth's surface.

To determine how features seen at Earth's surface correlate with structural and compositional differences deep within the planet, seismologists need denser networks of seismic stations so that they are recording seismic waves that propagate through finer and finer slices of the earth beneath them. (Find out how a seismometer works.) This information will also enable scientists to link structures inherited from earlier stages of continental formation to known and potential geologic hazards (e.g., earthquakes, volcanoes, landslides).

USArray is a 15-year program to place a dense network of permanent and portable seismographs across the continental United States. The seismographs record local, regional, and distant (teleseismic) earthquakes. The US Array is made up of four parts:

At the simplest level, earthquakes happen when parts of Earth's crust move. But, what happens at plate boundaries is actually quite complicated. To find out just how complicated things are, the Plate Boundary Observatory (PBO) is exploring the structure and evolution of the North American continent and the processes related to earthquakes and volcanoes using an array of high precision GPS stations, borehole strainmeters, and tiltmeters positioned throughout the western United States.

Questions being addressed by PBO:

Data from PBO's integrated network of GPS stations, strainmeters and seismometers, coupled with aerial and satellite imagery, are providing important temporal constraints on plate boundary deformation and are improving our knowledge of the fundamental physics that govern deformation, faulting, and fluid transport in earth's lithosphere. 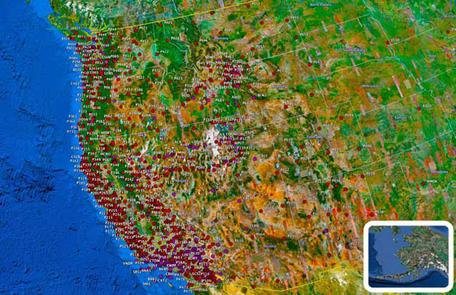 Provenance: Image source: EarthScope (http://www.earthscope.org/science/observatories/pbo)
Reuse: This item is offered under a Creative Commons Attribution-NonCommercial-ShareAlike license http://creativecommons.org/licenses/by-nc-sa/3.0/ You may reuse this item for non-commercial purposes as long as you provide attribution and offer any derivative works under a similar license.
PBO is exploring the structure and evolution of the North American continent and the processes related to earthquakes and volcanoes by installing an array of high precision Global Positioning System (GPS) monuments, borehole strainmeters, and tiltmeters throughout the western United States. 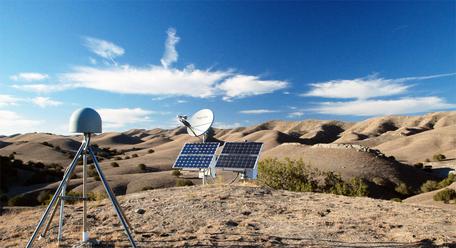 Provenance: Image source: UNAVCO (http://www.unavco.org/projects/major-projects/pbo/pbo.html#science)
Reuse: This item is offered under a Creative Commons Attribution-NonCommercial-ShareAlike license http://creativecommons.org/licenses/by-nc-sa/3.0/ You may reuse this item for non-commercial purposes as long as you provide attribution and offer any derivative works under a similar license.

Cloudy with a Chance of Tremors?

Millions of lives are threatened every year by the potential consequences of a strong earthquake. How many of those lives could be saved if we knew when and where an earthquake was going to happen ahead of time?

Although there are currently no reliable methods for predicting the exact time, location, and magnitude of an earthquake (and there may never be), scientists are making strides toward improved "seismic weather reports," which estimate the probability of earthquakes in a given locale. By observing quakes "up close," EarthScope's San Andreas Fault Observatory at Depth (SAFOD), is contributing to a major advance in the pursuit of a rigorous scientific basis for assessing earthquake hazards and predicting earthquakes. SAFOD will directly reveal, for the first time, the physical and chemical processes controlling earthquake generation within a seismically active fault. 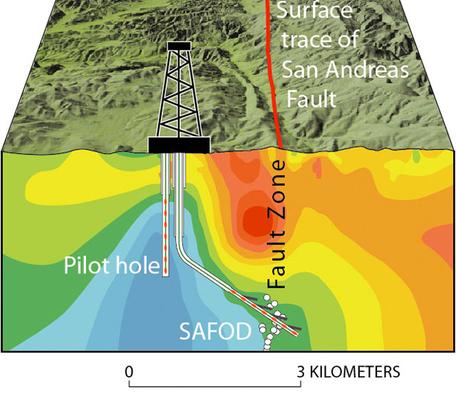 Provenance: Image source: EarthScope (http://www.earthscope.org/science/observatories/safod)
Reuse: This item is in the public domain and maybe reused freely without restriction.
In 2004, the National Science Foundation (NSF) and the U.S. Geological Society (USGS) began drilling a 3.2-kilometer (2-mile) deep borehole next to a pilot hole drilled two years earlier, adjacent to the San Andreas Fault. Advanced directional-drilling technology developed by the petroleum industry was then used to angle the hole so it crosses the fault near a region where repeating Magnitude 2 earthquakes are generated. Both the pilot and main drillhole are located near the town of Parkfield, California, where a magnitude 6 or greater earthquake has occurred on average every 22 years since at least 1857.

Instruments such as seismometers, strainmeters, pressure meters, and tilt sensors inside the borehole, along with core and fluid samples extracted during drilling, provide direct information about the physical conditions under which earthquakes occur. Scientists are using SAFOD data to learn about the:

As part of the efforts of the National Earthquake Hazards Reduction Program, SAFOD, along with USGS and the Parkfield Earthquake Experiment, will help scientists achieve a better understanding of what happens on and near a fault during the earthquake cycle. These data will aid their ability to predict the time and severity of future quakes and to protect lives and property from the harms associated with earthquakes.